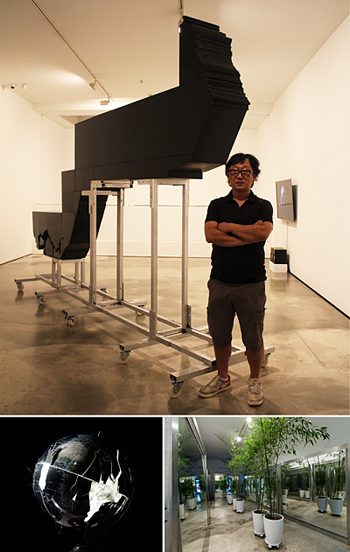 Top: Artist Lee Yong-baek poses with his new work titled “The Best Known Secret: Blind Landscape”(2016) installed at Hakgojae Gallery in central Seoul. Lee’s installation “An Unfamiliar Path,” above left, and “,“ above right, are also part of his solo show “The Unfamiliar Walk” at the gallery. [HAKGOJAE GALLERY]

Lee Yong-baek, 50, is one of the few Korean artists who has dealt directly with the tensions between the two Koreas, as well as other armed conflicts around the world, while still avoiding classification as an explicitly “political” artist.

His unique aesthetic is visible in the pieces now on display at Lee’s first solo show in Korea in eight years. The exhibition, titled “The Unfamiliar Walk,” kicked off at Hakgojae Gallery last week.

As part of the show, Lee is presenting four new pieces: two installations, one sculpture and one video piece. He also shows three upgraded versions of his famous works including the video piece “Angel Soldiers,” which wowed international audiences when he represented the Korean Pavilion at the 2011 Venice Biennale.

The exhibition starts with the installation “An Unfamiliar Path” on the ground floor, which leads visitors between six large mirrors wavering back and forth to dizzying effect.

“That’s what I have felt in recent few years, living in Korean society where absurd things like the Sewol ferry disaster have happened again and again,” the artist told the press in a preview on Friday.

On the way to the second room on the basement floor, visitors encounter a new version of “Angel Soldiers.” It shows a space filled with beautiful flowers of various colors, but the scene soon becomes eerie when some blossoms move to reveal soldiers camouflaged among them.

The second room features a big, black sculpture whose shape is borrowed from the empty parts of the Korean peninsula on Naver Maps, the mapping service run by Korea’s biggest internet portal. Koreans know what occupies these seemingly empty spaces: the military bases operated by the North and South. The piece is titled “The Best Known Secret: Blind Landscape.”

The video piece “What Makes the Earth Go Around” beside the sculpture could be considered the highlight of the exhibition. It shows an illuminated globe, which anyone can buy at various online shopping sites, in a darkened studio. With the “bang” of a gunshot, the globe gets partially broken and begins to spin from the force. The shooting continues, destroying various countries on the globe’s surface and reminding viewers of the appalling bombings happening around the world as they watch.

In the background, a sweet Scottish pop song once popular in Korea plays as the artist, who is shooting the globe, talks with his assistants. They encourage Lee to shoot this country or that region, and they all laugh when the globe finally falls.

The exhibition runs through Sept. 25 at the New Gallery of Hakgojae, behind its Old Gallery. Admission is free. The gallery is closed on Mondays. Go to Anguk Station, line No. 3, exit 1, and walk for 10 minutes.