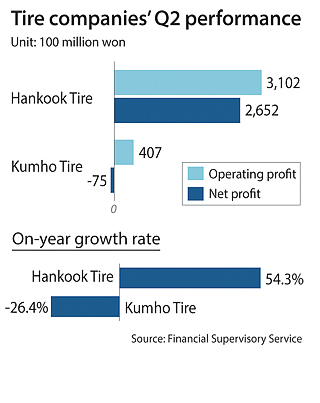 Korea’s two leading tire makers posted contrasting second-quarter earnings reports on Tuesday, with market leader Hankook Tire showing increased revenue and profit thanks to sales of its high-end tires, while No. 2 Kumho Tire saw a drop in revenue and profit.

In contrast, Korea’s No. 2 tire manufacturer, Kumho Tire, disappointed with 744.8 billion won in revenue, a 5.1 percent year-on-year drop. Its operating profit stood at 40.7 billion won, recording a 26.4 percent fall compared to the same period last year. Net profit was at minus-7.4 billion won.

UHP tires are on average two times more expensive than conventional tires because they are specially manufactured with enhanced gripping power. They are usually installed in high-end car models.

According to Hankook Tire’s earnings report, 37.3 percent of its second-quarter revenue came from UHP tires, a 2.6 percentage point increase from the same period last year. Sales were concentrated in the European and North American automotive markets.

Hankook Tire said in a statement that its contracts with BMW for the flagship 7 Series and with Porsche for its Macan sports utility vehicle also helped the company post a satisfying second quarter.

Shares in the company rose by 6.8 percent on Wednesday after the earnings announcement.

Nexen Tire, the third-biggest player in the market, posted 951.6 billion won in sales and 127.5 billion won in operating profit, a 4.4 percent and 19 percent year-on-year increase. Its sales of the profitable UHP tires rose by 11.1 percent, recording 219.5 billion won.

“Despite the North American and European car markets getting better, Kumho Tire wasn’t able to show a good performance there, which acted as a major factor in dragging down its overall earnings report,” said Koh Tae-bong, an analyst at HI Investment & Securities.