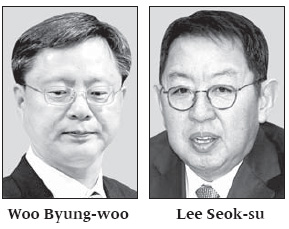 An internal investigation by the Blue House into the scandal-ridden presidential secretary Woo Byung-woo officially wrapped up on Thursday with the presidential office requesting the state prosecution to take over.

The month-long probe, held under the so-called special inspection system, finished a single day short of its deadline and concluded with Woo facing allegations of embezzlement and abuse of authority.

The Supreme Prosecutors’ Office will soon pick up the case and assign it to a team of officers.

The Blue House said in a statement that Woo has previously made it clear he would cooperate with prosecutors if they summon him for questioning.

Woo, senior civil affairs secretary to President Park Geun-hye, became the first target of the special inspection system, introduced last year to improve transparency and reduce corruption in the government by monitoring and investigating possible irregularities by the president’s family or senior officials.

Among the barrage of accusations against Woo, his son allegedly received special treatment while serving as a conscript police officer, and Woo is suspected to have used his wife’s company to understate his and his family assets when making his public servant’s asset disclosure.

Another suspicion is that Woo is close with Jin Kyung-joon, a former senior prosecutor mired in a major bribery scandal, and that he was aware of Jin’s irregularities during the vetting process for his promotion last year, but ignored them.

Under the current law, Lee is allowed to investigate suspected irregularities that took place only after Woo assumed his current post. The investigation, therefore, did not look into the dubious sale of Woo’s wife’s land to Nexon in 2011. Jin, accused of receiving enormous bribes from Nexon, was suspected of arranging the deal. Woo has denied the charge.

The special inspection team’s investigation of Woo ended Thursday, just two days after a broadcaster accused Lee of leaking information to a journalist, part of which he actually acknowledged.

MBC reported Tuesday that it obtained a conversation shared on social media by Lee and a newspaper journalist, in which the inspector appears to have hinted at the probe’s outlook. Lee allegedly said he would send Woo’s case to state prosecutors for further investigation after meeting his deadline this week.

Lee was also said to have told the reporter that one of the various accusations against Woo does not fall within his jurisdiction, and that he would send paper documents proving his statement. The reporter allegedly refused to see them.

Details as to who the reporter was or which media outlet he or she works for were not mentioned, neither did MBC provide details on how exactly it obtained the conversation or when it was shared.

Under domestic law, a special inspector who leaks information regarding an ongoing probe can face up to five years in prison or a five-year suspension from his or her job post.

Lee said in a statement Wednesday that he is not a social media user and that he has never contacted the press or leaked any confidential information via any SNS tool. He did, however, admit to telling a reporter the details mentioned on MBC over the telephone.

Lee urged MBC to reveal how it was tipped off about the conversation, raising the possibility that the broadcaster may have wiretapped his phone. If so, MBC “will have to take responsibility for this illegal method of news coverage,” Lee said.

Lee added that he “won’t be affected” by MBC’s report, and that he would finish the inspection into Woo as planned.