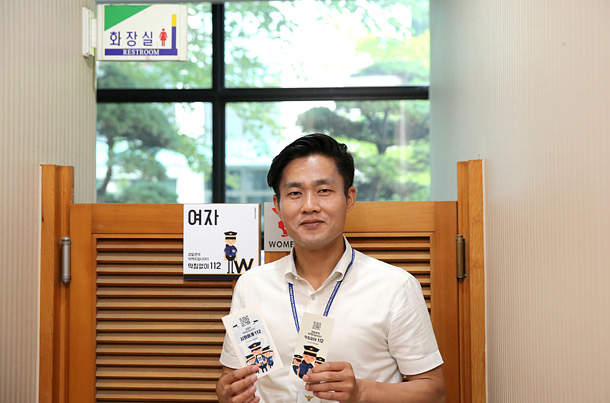 Like so many others when they heard the news of a young woman being stabbed to death in a public toilet in Gangnam in May, forty-one-year-old Kim Kyung-un was left speechless.

Kim is a police officer in charge of PR and planning at the Gyeonggi Nambu Provincial Policy Agency.

He is also the father of two young girls, and since hearing about the murder, he has been trying to come up with ways to make women feel safer when using public toilets.

That’s when Kim started to reflect on the so-called “yellow footprint” campaign that he started in May.

In that campaign, he had painted roadside areas bright yellow so children would be visible while waiting to cross roads.

The campaign was a great success and has already been shown to make children safer while crossing roads.

Kim says he is a big believer in changing the way people think and behave simply by making minor tweaks in their awareness.

He therefore started his so-called ansim campaign, naming it after the Korean word for “safety.”

It is a sticker campaign intended to make women feel safer while using public toilets.

The stickers, which say that police will protect women and that women using the bathroom shouldn’t hesitate to call 112 in case of an emergency, were created with the help of PR officers at 30 police stations in southern Gyeonggi.

Kim and the PR officers also made a 40-second video that instructs people on how to ask for help by using text messages if they happen to find themselves in a situation in which it may be difficult to make a call.

They even created a QR code that directs to the video, which can be viewed on smartphones.

“A recent survey showed that the level of safety that women felt since we placed those stickers has improved,” Kim said.

He added, “I will continue to come up with ideas that would help increase the public’s safety.”