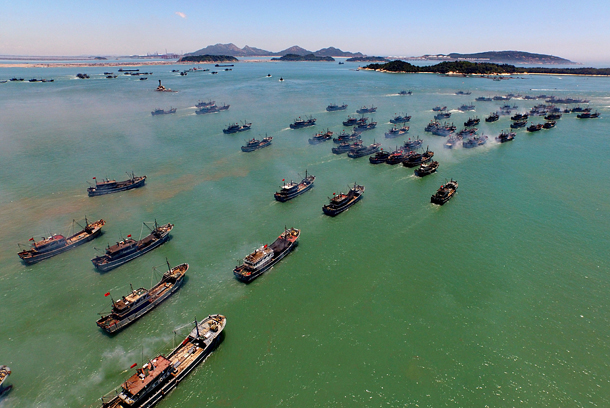 On Wednesday, Indonesia celebrated its Independence Day with a bang —blowing up several Chinese boats that had been caught fishing illegally in its waters and impounded. China doesn’t dispute Indonesia’s territorial claims, but Chinese fishermen have more pressing concerns.

According to reports in Chinese state media this week, overfishing and pollution have so depleted China’s own fishery resources that in some places — including the East China Sea — there are virtually “no fish” left.

That’s a frightening prospect for an increasingly hungry country: China accounted for 35 percent of the world’s seafood consumption in 2015. Seeking catches further afield — including in Indonesian waters — isn’t really a solution; fish stocks in the disputed South China Sea have themselves fallen by as much as 95 percent from 1950s levels. If China doesn’t want the rest of Asia’s fisheries to suffer the same fate as its own, it’s going to have to think much more ambitiously about how to create a sustainable food supply for the region.

As in other developing countries, China’s ascent up the income ladder has been accompanied by an improvement in quality and quantity of diet.

Seafood — once a pricey luxury in much of the country — has become commonplace, even inland; China is now the world’s biggest seafood consumer and exporter. The economic impact has been extraordinary. Between 1979 and 2013, China’s fleet of motorized fishing vessels grew from 55,225 to 694,905 boats, while the number of people employed in the fishing industry exploded from 2.25 million to more than 14 million.

Meanwhile, the average fisherman’s income increased from around $15 per month to nearly $2,000 per month. Today, the fishing industry generates more than $260 billion annually, accounting for around 3 percent of Chinese GDP.

But in pursuing growth (and catch) at all costs, China’s fishermen have exacted a terrible environmental toll. Today, the Yangtze River, which supplies 60 percent of China’s freshwater catch, produces less than a quarter of the fish it did in 1954, and most of the 170 species in the river are on the verge of extinction. The situation is no better offshore. The government acknowledges that Chinese fishermen routinely exceed annual sustainable catch limits in Chinese territorial seas by 30 percent or more. A visit to any Chinese seafood market will turn up large inventories of under-sized fish that should never have been hauled in in the first place.

Blame for this state of affairs falls on both the fishing industry and the government, which spent $6.5 billion on fisheries subsidies in 2013 alone.

Nearly all of that money paid for cheap fuel that allowed and arguably encouraged Chinese fishermen to venture further from shore, often into the comparatively un-plundered exclusive economic zones of countries such as Indonesia. Worse, the Chinese military has openly abetted those efforts by subsidizing everything from ice to GPS on Chinese fishing boats. The goal: to solidify China’s claim to “historical fishing rights” in the vast and deeply contested South China Sea.

Chinese regulators are fighting a losing battle against these other wings of the government. In 1999, China imposed a seasonal fishing ban in the South China Sea, and in 2002 regulators did the same in sections of the Yangtze River. But the continued deterioration of both fisheries only underscores how ineffective those restrictions have been. In response, in 2013 one Chinese scientist proposed an outright 10-year moratorium on fishing in the economically essential Yangtze. This week, Chinese officials signaled they were open to the idea and were even considering a wholesale culling of China’s fishing fleet.

While both measures would be a boon to Asia’s fisheries, they’re only a start. To make a real difference, China would need to demilitarize its fishing fleets and end the ruinous military-funded fuel subsidies that are encouraging unregulated catches, not to mention raising geopolitical tensions. Fishing fleets should be regulated by civilian marine and agricultural authorities, not generals with little interest in environmental sustainability.

Equally important, China should explicitly link the task of reviving and preserving fisheries to the clean water and other environmental initiatives in its economic planning documents, including the government’s five-year plans. Doing so would raise them to a national priority akin to cleaning up Beijing’s air.

Those priorities could then be extended to trade agreements, including the Regional Comprehensive Economic Partnership (RCEP) China’s currently negotiating with other Asian nations, as well as bilateral deals with other claimants in the South China Sea. The goal should be to make China a leader — and perhaps even a brand — in sustainable seafood. With luck, that would buy China not just more fish to eat, but a reputation as a responsible global citizen.