A reunion for opening night at Lotte Concert Hall

A reunion for opening night at Lotte Concert Hall 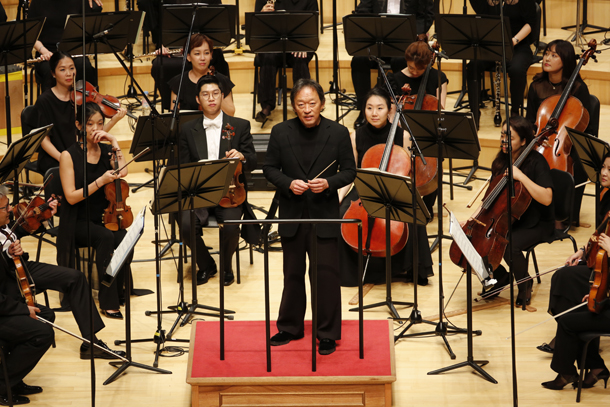 One would expect the grand opening of the nation’s second concert hall for classical music to be a grand affair. But the Lotte Concert Hall inside the Lotte World Mall in Jamsil, southeastern Seoul, made its official debut without much pomp and circumstance.

Perhaps its owner, Lotte Group, wanted to keep things quiet as it has been embroiled in controversy over the past year with prosecutors continuing to investigate the group’s well-publicized family feud. Or perhaps it was because the opening concert was being staged by the Seoul Philharmonic Orchestra under the baton of controversial maestro Chung Myung-whun, the former artistic director and principal conductor of the orchestra. Chung was cleared of all charges by the police regarding embezzlement of the city-run orchestra’s funds and violation of his duty early this month. However, the prosecutors are still investigating the defamation case that was filed by the former president of the orchestra, Park Hyun-jung.

Nevertheless, the auditorium was buzzing and filled to capacity when the opening concert began with Beethoven’s “Leonore Overture No. 3, Op. 72a.”

It was the orchestra’s first performance under Chung’s baton in eight months after the conductor refused to renew his contract with the orchestra in late December, after working with them for about 10 years. Since then, the orchestra has been performing with numerous guest conductors for its scheduled concerts and performances have been receiving satisfactory responses from classical music aficionados. But during the opening concert at Lotte Concert Hall on Friday, despite concerns that the eight month break between them may create discord, the orchestra was really in their element with their former maestro.

The following piece was the world premiere of a piece by the orchestra’s composer-in-residence Chin Un-suk titled “Le Chant des Enfants Etoiles.” Chin has been writing contemporary classical music, or the “classics of the future” as she puts it, for the orchestra and was commissioned to compose the piece by the conglomerate for the opening of the venue. Contemporary classical music is not always easy to sit through, especially when it goes on for 40 minutes. But listening to choirs composed of both adults and children singing poems about cosmic and other natural phenomena that were written by great poets throughout time ranging from Fernando Pessoa to Eeva-Liisa Manner, on top of deeply resonant instruments like tubular chimes and timpani, was like being sucked into the cosmos.

The final piece, Saint-Saens’ “Symphony No. 3 in C minor, Op. 78 ‘Organ,’” was a perfect way to show off the new concert hall’s sound quality, especially the impressive resonance that’s equal for all members of the audience regardless of their seat because of the space’s unique vineyard-style design.

Musically, Chung is a commendable maestro and seems like he still is a respected musician by many. People in the auditorium clapped and cheered upon his entrance to show their support despite the controversies. And when he finished every piece with the orchestra in perfect harmony, his fans couldn’t stop letting out triumphant yells and standing ovations.

For an encore, Chung and the orchestra played “Arirang Fantasy,” composed by Choi Seong-hwan from North Korea. And when both the audience and conductor thought it was the end, the orchestra surprised Chung by playing Brahms’ “Hungarian Dances No. 1,” which used to be their regular encore piece for concerts. Encores continued throughout the night and both the orchestra and Chung seemed to express through the music how much they had missed each other.

However, Chung made it clear after rehearsals on Aug. 16 that he’s not going to come back to take a “position that comes with numerous responsibilities other than music.”

“I just want to be of help to this country through music,” he said in a press conference at Lotte Concert Hall.

“I won’t be taking any positions that require responsibilities, but I will certainly be open to helping Korea if I can,” he added, hinting that he’s open to performing with the orchestra as a guest conductor but won’t return as artistic director.