Woori Bank, which once led the nation’s banking industry, is once again on the block, for the fifth attempt since the government decided to sell it off in 2010.

The Financial Services Commission Monday announced a plan to privatize Woori by splitting a 30 percent stake held by the state-run Korea Deposit Insurance Corporation into splinters of 4-8 percent, depending on demand by bidders, with a deadline set for the end of this year.

Instead of offloading a large chunk at once, the FSC is attempting what it calls an “oligopolistic shareholder structure.” That may lure more investors who opt for smaller amounts of shares at a lower price.

“We have reached a consensus that the sale of a controlling stake with management rights is hard to achieve,” said Yun Chang-hyun, chairman of FSC’s Korea Public Fund Management Committee, which is responsible for managing the Woori sale.

“At the same time, the committee also agreed on the view that further delay is unacceptable since it will only increase costs.”

The committee failed four previous times due to lack of interest by investors. 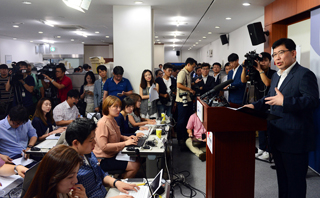 The FSC said that a group of investors holding the proposed 4-8 percent stake will be entitled to recommend outside directors and even the chief of Woori Bank.

“We expect that the new Woori chairman will be elected during a shareholders’ meeting in March,” said Ahn Dong-hyun, a member of the committee, adding that the new deal structure is expected to be accepted by 4 to 8 new shareholders.

The committee said that it confirmed “fair interest” by investors at home and abroad without specifying who they are.

The FSC said that the regulator will factor in bidding prices first along with other “non-price” aspects.

Yun didn’t detail what the non-price aspects are.

The committee will put up an official sale notice tomorrow and start accepting letters of intent around Sept. 23.

The bidding will be closed some time in November and the winning bidders will be announced in the same month, according to the FSC.

Lee flew to the United States, Singapore and Japan earlier this year.

Another issue in the deal is how the financial regulator may deal with hostile bids from foreign investors.

Yun played down the possibility since the Woori deal won’t include outright management rights.

Particular focus is on China’s Anbang Insurance. The big insurance unit participated in the fourth attempt to sell Woori in 2014 and tried to get a 10 percent share valued at around $2.7 billion. It was the sole bidder, whoever and the deal fell through. At least two bidders are required for the tender process to succeed. 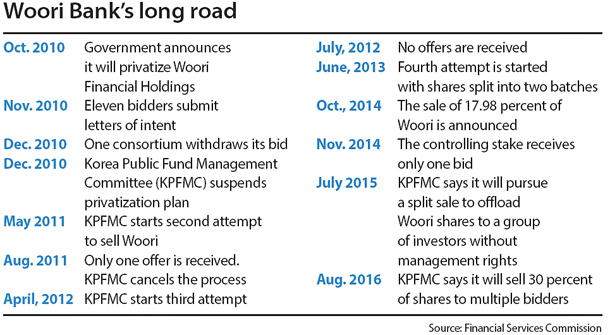 Analysts say market conditions are favorable for the sale of Woori Bank due to improved stock prices and earnings.

Woori Bank closed at 10,250 won on Monday, down 0.97 percent from the previous trading day.

The commercial bank is also recently enjoying an upturn in profit.

The bank reported 307 billion won in net profit in the second quarter, a result that surpassed analysts’ expectations. Brokerage houses such as Mirae Asset and Hana Financial Investment have recently scrambled to adjust target prices for Woori to 15,000 won and 14,500 won. The first quarter also saw better than expected earnings results.

“Woori is improving its fundamentals,” said Eun Kyung-wan, an analyst at Meritz Securities. “Skepticism was prevalent because of the failed previous attempts. But this time around, the chances for success are higher.”