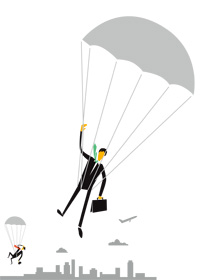 When Lee Hyun-cheol, former standing commissioner of the Securities and Futures Commission under the Financial Services Commission, took over as CEO of Korea Money Brokerage this month, some in the financial industry said that the “Mofia” had finally lowered its standards in life after government service.

The previous administration was notorious for its appointments of senior officials from the Ministry of Strategy and Finance, a trend that led to the creation of the term “Mofia” -- a combination of MOF (Ministry of Finance) and mafia that referenced the former civil servants. The Mofia have frequently been criticized for decades for its control and influence over the Korean financial market through its connections as well as landing high-profile positions in state-run companies and committees after retirement from public service.

The new job that Lee, former SFC commissioner who worked at the finance ministry until 2008, has isn’t considered as an influential position, as it was previously held by lower-level government officials.

“The range of choices that we can make has downsized compared to the past,” said a high-ranking government official. “Today the general atmosphere is: take any position that is opened even if it’s not to one’s satisfaction.”

It’s not only the Mofia that is seeing changes, so are the “Geumpia,” which refers to high-ranking officials at the Financial Supervisory Services.

Choi Jong-ku, a former FSS vice governor, became chief executive officer of SGI Seoul Guarantee Insurance in January. Until recently, former vice governors of the financial regulator usually took the position of either the vice chairman or the chairman of the Financial Services Commission or headed state-run financial institutions such as the Industrial Bank of Korea or the Korea Export-Import Bank after government service.

Jung Ji-won, the former standing commissioner at the FSC, became CEO of Korea Securities Finance Corp. in December. Although the position previously was held by a Mofia member, there hasn’t been an official at Jung’s position to take the CEO seat.

Predecessors Park Jae-seek and Kim Young-kwa both were high-ranking government officials who worked as the commissioner of Korea Financial Intelligence Unit under the FSC. The position is considered a level lower than the position that Jung held as the standing commissioner.

There are also those who, instead of waiting for the top position to open, are settling for second-in-command.

The financial industry speculates that one of the biggest reasons former government officials have been lowering their choices of job positions is because of the more scrupulous evaluations of their job applications.

Since the Sewol ferry sinking in April 2014, new regulations limit the hiring of former government officials after they were criticized for lack of oversight in the accident. Their previous companies or institutions have made it much difficult for them to regain positions at either high-profile public institutions or large commercial banking groups.

On the contrary, smaller company and association evaluations are much easier to pass, drawing huge applicants from the public sector. The responsibility that comes with the position that they take up at smaller organizations and companies is much smaller than in major institutions.

“At times like this, it is better to go to a smaller institution than being swirled into controversies regarding accountability on corporate restructuring,” said an executive at a state-run bank.

However, there is still criticism over the so-called parachuting in of such government officials, especially at financial organizations. The vice chairman position at a financial association, which usually was a position that was given to former financial regulators, was stripped away after the Sewol tragedy brought light to bureaucrats landing at such positions after retirement that resulted in lax inspections and corruption. The intention was to stop hiring former financial regulators in the position of vice chairman. Instead the post has been replaced with another executive position, managing director.

Industry experts say in order to entirely stop parachuting in bureaucrats, institutions have to increase their fairness and transparency in the hiring process.

“Because the hiring processes in picking CEOs and executives at financial institutions are all different, the former financial regulators are parachuting to that position using loopholes,” said Moon Jong-jin, a professor of business management at Myongji University. “In the case of financial associations its members should decide [the CEOs and executives] in a vote while for financial institutions, the employees and outside experts should be involved in the hiring process.”