The power of sports diplomacy

The power of sports diplomacy 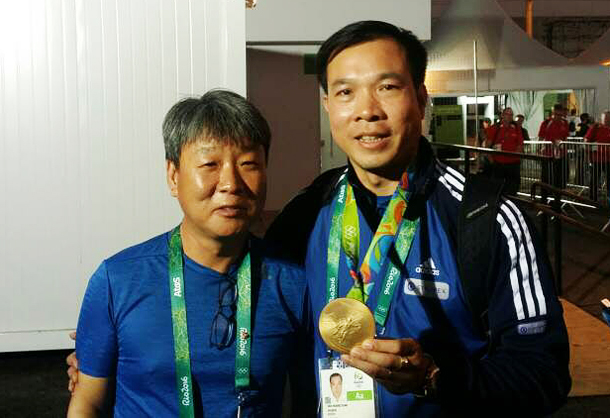 The Rio Olympics was a series of emotional moments. In the women’s 5,000-meter race, U.S. and New Zealand runners took hard falls but helped each other finish the race. Korean gymnast Lee Eun-ju, 17, took a selfie with Hong Un-ju of North Korea, 10 years her senior.

What impressed me the most was when Misaki Matsumoto and Ayaka Takahashi won the women’s doubles gold medal in badminton, the first ever for Japan. They embraced Korean-born coach Park Joo-bong and burst into tears.

Park is a badminton legend, and his Korean-style intense training transformed Japan’s team. In the 2004 Olympics, 12 of 13 Japanese players lost their first round. The Japanese players beat the Korean pair in the semifinal round, but no one blamed Park. Instead, Koreans praised Park for elevating Korea’s image. He is also welcomed in Japan. At a time that the two countries are not on good terms because of issues surrounding “comfort women,” Park’s success is rare good news for both countries. This is the power of civilian diplomacy.

In Rio, 18 Korean coaches worked for 16 countries. Many of them succeeded with intense training. Park Chung-gun coached Vietnamese shooter Hoang Xuan Vinh, who won the first medal in history for the country. Park took Hoang to the Incheon Shooting Range for training.

Chung Hoon took over the Chinese judo team, and under his strict leadership, one of the athletes won a bronze medal. It is said that 30 athletes ran away from training camp because of his harsh training, but Chung brought them back. Choi Young–seok coached the Taekwondo team for Thailand and Lee Ki-sik led the USA archery team. Both countries won silver medals, and the coaches are heroes.

However, Korea is at odds with Japan. The Thaad deployment has created tension between Korea and China. Korea fought on the American side during the Vietnam War. But in these countries, the successes of Korean coaches greatly improved Korea’s image.

Sports have the power to calm hatred. In 1995, at the height of apartheid in South Africa, the predominantly white rugby team won the World Cup as black citizens cheered for the team. The victory greatly helped ease racial discord. The normalization of U.S.-China relations in 1979 was inspired by the friendship between ping-pong players of the two countries.

Using this opportunity, society should support the sports leaders’ Korean wave. Regardless of the athlete’s nationality, we can start by being more open-minded toward foreign coaches. If Japanese and Chinese coaches train Korea’s judo and diving athletes, they may be able to win gold medals.