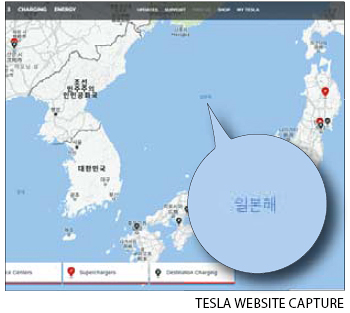 Tesla Motors launched its Korea website Friday and began preorder sales of its products online as well as reservations for test drives. But in less than a week the automaker has already drawn harsh public criticism for its web translations that contain misspellings and show its lack of understanding of the Korean market.

Tesla has been especially pounded by the Korean public for the map the electric-car manufacturer earlier used on its website that labeled the East Sea as the Sea of Japan and the controversial islet between Korea and Japan Dokdo as Takeshima, its Japanese name.

As of Tuesday, the American company had upgraded the Korean website, changing Sea of Japan to East Sea. However, the map on its U.S. website still has both the Sea of Japan and East Sea.

An online automobile community user said the level of Korean on the local website was equivalent to that of Google’s translator.

Tesla also has been criticized for its lack of information despite marketing pricey, high-end electric vehicles.

The site has no information on retail prices, the amount of time it takes buyers to receive cars after ordering or how the vehicle will be delivered.

Callers who dial the number posted on the site receive an automated voice message that says that Tesla is happy that preorders have started, thanks to the huge interest in the car.

“I’m really anxious if the contract that I have signed [with Tesla] in such ways would have legal validity,” said a 34-year-old customer who preordered the Model 3, which seats five. On the U.S. site, prices for the Model 3 start at $35,000. “It’s an issue of signing an expensive car and it would be best if they took a little bit more care.”

Customers questioned if Tesla has made the necessary effort to consider the habits of Korean consumers, who frequently purchase products online.

“At this level it seems they are very unprepared,” said an automotive industry official, who requested anonymity. “They will not be able to gain customers’ trust if they only focus on sales figures and ignore the public sentiment.”