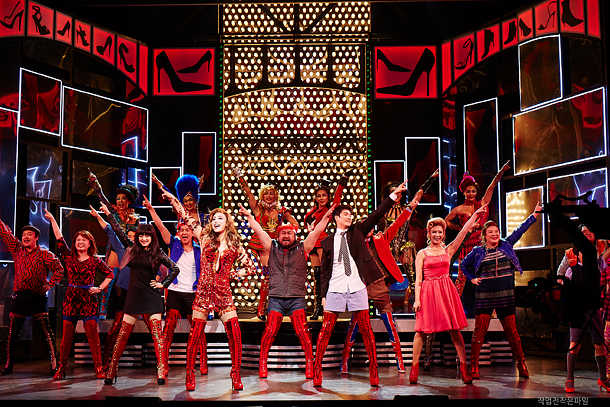 A scene from the Korean production of the hit musical “Kinky Boots” during its premiere in 2014. The show is making a comeback next month, with several new additions to the cast, at Blue Square in Hannam-dong, central Seoul. [CJ E&M]

Unlike classical ballets or operas, there’s usually no dress code for attending a musical. But for the upcoming Korean production of “Kinky Boots,” the organizers recommend all audience members come to the show adorned in something red.

Since it’s the musical’s second run in Seoul since its premiere in 2014, Korean entertainment giant CJ E&M, which is producing the show here, said they wanted the audience to “be a part of the show” and “have a little fun.”

As a co-producer of the original Broadway musical, which is based on the 2005 film of the same name and features music composed by pop icon Cyndi Lauper, CJ E&M became the first Korean theater producer to receive a Tony Award.

“The storyline is pretty much the same,” said Park Min-sun, from CJ E&M’s theater division. “Since the show will be staged here for the second time, we wanted the audience to really enjoy the show this time, not just when they are in the theater but the whole process of coming to the show as well.” 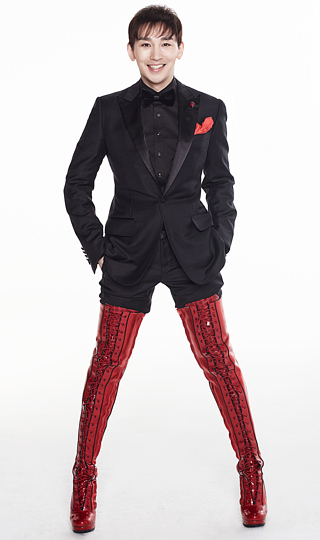 The musical revolves around Charlie Price, who inherits a failing shoe factory from his father. To save the family business, Charlie enlists the help of Lola, a drag queen, and the two begin producing custom footwear for drag queens - including the titular, red-sequined “kinky boots.”

Many of the characters in the show wind up wearing skin-tight, thigh-high boots with heels up to 15 centimeters (6 inches). According to Ko Chang-seok, a veteran film and musical theater actor reprising his role as Don in “Kinky Boots,” those who are participating in the musical for the second time have gotten used to the strangulating feeling of the boots, but newcomers have been struggling with sore feet and blisters.

“When I first tried them on, the boots were killing me. I began to have great respect for all ladies with high heels,” said Ko. “Now, I kind of understand why they wear them. I know I’m not well-proportioned naturally, but when I’m wearing these boots, I feel tall and stylish. It’s too bad I can’t wear them everyday.”

New additions to the musical include Chung Sung-hwa, who will be alternating the role of Lola with Kang Hong-seok, who played the same role for the first run, as well as Kim Ho-young and Lee Ji-hoon who will alternate Charlie. Actress Kim Ji-woo also has been newly cast as Lauren, a factory worker.

The news of Chung playing such a feminine role surprised many, as the actor has been making a name for himself on stage with more serious roles like Jean Valjean in “Les Miserables” and Don Quixote in “Man of La Mancha.” Although audiences may have a strong image of him as being “this strong and macho male figure who always dies in the end,” Chung said this actually isn’t his first experience as a drag queen, as he once played Zaza in “La Cage aux Folles.”

Chung isn’t the only one defying expectations. Kim, who is best known for his ability to play flamboyant, feminine characters like Adam, a drag queen, in the musical “Pricilla,” or Jacob, a gay butler, in “La Cage aux Folles,” surprised many by taking on the role of Charlie.

“Through this role, I want to get rid of this perception of [myself] that I would or should play all the gay or drag queen roles in musicals,” said Kim. “I want to show people that I have thousands of faces I can put on, and that my feminine side is just one.”

In fact, Kim said he didn’t even consider auditioning for Lola, even though his friends all thought he should.

“I’m very slim and I thought my figure doesn’t really match Lola,” said Kim. “Lola used to box and her father wanted her to become a champion boxer so I thought a masculine or muscular actor should take the role. Further, my range suits Charlie better than Lola. But just because she is a drag queen, people thought that I should take the role.”

To hear more about the show’s return and how Kim prepared for his role, the Korea JoongAng Daily sat down with Kim for an interview. Here are some edited excerpts.

Q. You said you’ve put a lot of effort into erasing the image people might have of you. The show hasn’t started yet, but what kind of efforts are you making at the moment?

A. As soon as I was told that I got the role as Charlie, I went straight away to shop, but not to my usual places. Instead, I went to shops like Giordano and Uniqlo, where they sell the most simple and plain clothes like shirts and cotton trousers. I have quite a lot of followers on social media because I upload a lot of pictures on the latest trends and fashion. But this time, I shopped in those places and began posting selfies like I used to. Some people took notice and told me that my style has changed. One might say it has nothing to do with the musical, but I believe that’s the whole process of image-making. Young people, who are also consumers of musicals in Korea, are very active online and I thought the best tool to make my own image was on my personal accounts. Because Charlie is such an ordinary man, I wanted to dress like him from day one, and want people to perceive me like a plain and ordinary man.

It must be very difficult for you to refrain from wearing something eye catching and trendy as you’ve always been known as a fashionista. Did you have any difficulties preparing for the role?

Well, Lee Ji-hoon, who is alternating the role with me, says he’s struggling with the amount of lines Charlie has. It is difficult to memorize all the lines. But personally, that’s not a problem for me. Others also say the most difficult part of being in “Kinky Boots” is to be in those killer boots. But honestly, the most difficult part for me in playing Charlie is pretending to have problems wearing and walking in the boots. Since I played drag queens in other musicals, wearing heels isn’t a problem. Actually, I’m quite comfortable in them. But in the musical, Charlie has difficulty getting his feet into them and walking in them, so pretending to have that trouble is, probably, the hardest thing for me (laughs). To add one more thing, it’s really difficult for me to hear people calling the color of the boots red as they are burgundy. When I tell them this to correct them, they look at me dumbfounded like they’ve never heard the word and tell me that I should definitely be Lola, so I try not to say it. That’s so difficult.

Isn’t it better to have one specific image as an actor?

I also thought having a specific color as an actor was a good thing. But as I got older - I’m in my mid 30s now - I began to feel limited by having this one specific color. Because people associated me with a feminine image and drag queen roles, I realized that most of the roles I landed were similar. Do you know what the most frequent question I get is? It’s “Why don’t you do ‘Hedwig [and the Angry Inch]?’” I guess they ask me this because the image of me dressing up as a woman is vividly embedded in their heads. For the first few years, I always replied by saying, “It’s not that I don’t want to do it - no producer has called and offered me the role!” But as you may know, Hedwig is not simply a man dressing like a woman. She has suffering and agony inside her, and the actor playing the role should be able to really portray her well. I wish to play her one day, but when I’m ready. Still, it’s a pity that people ask me such questions simply because I suit women’s clothes.

The musical kicks off on Sept. 2 and runs until Nov. 13 at the Blue Square in Hannam-dong, central Seoul.