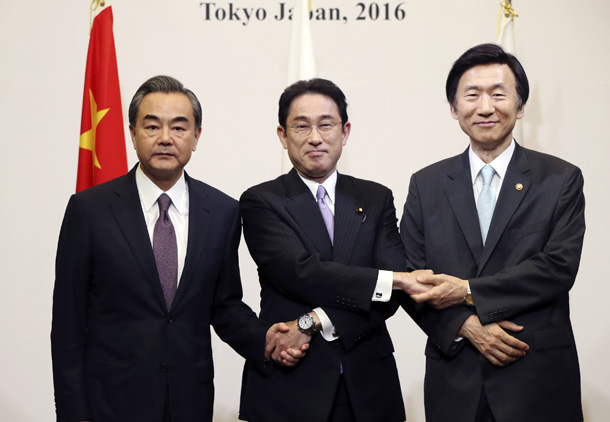 The foreign ministers of South Korea, China and Japan on Wednesday declared they will lead global efforts - including those of the UN Security Council - to respond to Pyongyang’s nuclear and missile threats following the regime’s latest provocation.

South Korean Minister of Foreign Affairs Yun Byung-se, along with his Japanese counterpart Fumio Kishida and Chinese counterpart Wang Yi, during a trilateral meeting in Tokyo jointly condemned the North’s launch of a submarine-launched ballistic missile (SLMB) earlier that day.

During their three-way talks, the top diplomats demanded that North Korea refrain from provocative actions and abide by UN Security Council resolutions.

Kishida said in a joint press conference with Yun and Wang after the meeting that North Korea’s launch of the SLBM earlier that morning into waters controlled by Japan “will not be tolerated.” He said he hoped that the three countries could “closely cooperate to lead global efforts” to counter Pyongyang.

Yun said, “I emphasized the seriousness and urgency of the current situation as North Korea advances its nuclear and ballistic missile capabilities, including through launching an SLBM, leading to the possibility of a pre-emptive nuclear strike or additional nuclear tests.”

Wang emphasized that the cooperation of the three countries is central to Northeast Asian ties. He also pointed out that “many problems exist” between Korea, Japan and China, without specifically naming Beijing’s territorial and historical disputes with Tokyo or its issue with Seoul’s deployment of an American antiballistic missile system. But he added that the three countries are the biggest economic powers in the region and have a responsibility to lead regional cooperation and “maintain regional peace and stability.”

This marks the 8th trilateral foreign ministers’ meeting, a follow-up to the talks last held in March 2015 in Seoul, the first such meeting in three years because of the ongoing diplomatic tensions resulting from historical and territorial issues.

In Yun’s separate bilateral talks with Wang that day, the two sides repeated their positions on the deployment of the U.S.-led Terminal High Altitude Area Defense, or Thaad, system in South Korea, which Beijing has opposed.

According to Seoul’s Ministry of Foreign Affairs, Yun said that “no particular issue should undermine efforts to develop bilateral relations between the two sides,” adding that the two agreed to continue communicating on the Thaad issue.

Wang took a harsh stance during the sidelines of an Association of Southeast Asian Nations (Asean) conference of foreign ministers in Vientiane, Laos, in July, as he declared that Seoul “has undermined the foundation of our bilateral trust,” following Korea’s decision to deploy the Thaad system earlier that month.

But in comparison to last month, observers pointed out that Wang generally showed a friendlier tone this time around during discussions with Yun.

The Korean Foreign Ministry said in a statement that Wang called 2017, which marks the 25th anniversary of diplomatic relations, “a highly significant year in terms of bilateral ties” and also agreed with Yun on the “need for continued advances” in the two countries’ bilateral strategic cooperative partnership.