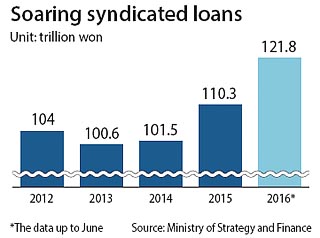 To slow growth in household debt, the government is tightening requirements for group loans for property redevelopments and the state-run Korea Land & Housing Corporation will decrease the number of apartment units put on the market.

In a joint government announcement Thursday led by the Ministry of Strategy and Finance, the government said it will try to discourage the kind of group loans that have revived the real estate markets in Gangnam and other parts of southern Seoul, particularly for older apartment complexes that are being given permission to be razed and rebuilt.

Starting in November, potential buyers of newly built apartments or those that are being redeveloped will have to submit income data to a financial institution when applying for a so-called syndicated loan, which they didn’t have to do previously.

Syndicated loans are offered to groups of borrowers who are buying a number of units of newly built or redeveloped apartments. Financial institutions offer lower interest rates than on individual mortgages to attract a group of borrowers. The group loan is often used as a mid-settlement payment to the company building or redeveloping the apartment complex.

Currently, the credit vetting process is simpler for a group than an individual. The creditworthiness of each individual doesn’t have to be checked.

New home buyers can choose one of the financial institutions that they prefer. It is usually borrowed by the homebuyers as a group as a mid-settlement payment to the construction companies.

“Household debt is growing rapidly due to low interest rates and the real estate market has been revitalized recently,” said Deputy Prime Minister of Economics and Finance Yoo Il-ho on Thursday. “Household debt is considered one of the main threats the Korean economy faces and we will solve the problem by tightening the borrowing process and regulating the number of apartment units in the market.”

The current syndicated loan balance is at 121.8 trillion won as of the end of June, a 10.5 percent increase from the end of last year.

The government will limit the number of new apartment units coming onto the market.

“This is the first time that the government will regulate the number of units in the market every year,” said Deputy Finance Minister Lee Chan-woo at a press briefing held at the Government Complex in Seoul.

The government will have Korea Land & Housing Corporation, a state-owned enterprise, put only 75,000 units onto the market this year, which is a 41.4 percent drop from last year’s 128,000 units.

The Bank of Korea on Thursday announced that household debt including credit card purchases once again broke an all-time record by reaching 1,257.3 trillion won as of the end of the first half of this year. That raised the possibility of debt being over 1,300 trillion won by the end of the year. When compared to the first three months of this year, household debt including credit card purchases has risen 2.75 percent and when compared to a year ago it rose 11 percent.

Some analysts doubt the government measures will be effective especially with the possibility of the central bank further lowering interest rates as early as next month, which would fuel borrowing.

“The government’s decision to strengthen regulations on syndicated loans won’t have much impact on the real estate market since it is growing largely due to the baby boomers, who are financially stable, and who don’t take out loans in the first place,” said Sim Kyo-un, a professor at Konkuk University, who teaches real-estate related subjects.

Song In-ho, a researcher at Korea Development Institute, noted that the government had more options to solve the household debt issue.

“Currently, the housing market is booming as Koreans, who don’t have the ability to pay back their loans, are allowed to buy two to three apartment units through loans,” said Song. He suggested the government strengthen credit check for borrowers and limit the number of units that they can buy, especially in luxury complexes, to reduce speculation in real estate.

Kwon Dae-jung, a real-estate professor at Myongji University, said the government’s plans might have a positive impact on the real estate market.