Top exec at Lotte Group commits suicide on a trail

Top exec at Lotte Group commits suicide on a trail 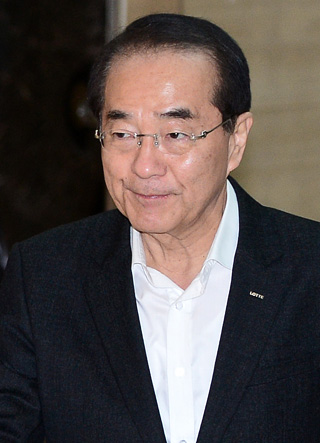 Lotte Group Vice Chairman Lee In-won was found dead on a hiking trail in Yangpyeong, Gyeonggi, Friday morning, a few hours before he was to be questioned by prosecutors investigating corruption in the group.

The 69-year-old vice chairman was often described as the second-in-command of Lotte Group after Chairman Shin Dong-bin, or Shin’s right-hand man. He was the most powerful figure in the group outside the Shin family, managing all operations at some 90 Lotte affiliates.

Lee’s body was discovered lying on the ground next to a tree by a man in his 60s taking a morning walk, who called the police. It was around 7:11 a.m. and Lee was already dead when the man found him, according to police.

Police concluded Lee hanged himself on the tree using a tie and a scarf, but that the tree branch snapped.

“There is no extraordinary external injury, other than his neck showing signs of being hanged,” police said. “No signs that would point to possible murder or homicide.”

After an autopsy of Lee’s body, the National Forensic Service announced that typical signs of suicide were found.

“My father has been suffering in the midst of the prosecution probe,” Lee’s son said, according to the police. “And recent happenings at home made things hard for him, too.”

According to police, Lee’s wife has been struggling for years with an illness, and Lee’s health recently deteriorated, too.

Lee left a suicide note in his car, which was parked nearby, according to police. “There is no slush fund at the Lotte Group,” the note reportedly read. “In his note, Lee expressed the strain of being investigated by prosecutors on slush funds and other issues,” police said.

Lee was facing an investigation into whether he was involved in creating slush funds at Lotte Engineering and Construction, in addition to other corruption charges. He was to show up at the Seoul Central District Prosecutors’ Office at 9:30 a.m. Friday.

“We don’t know why Lee committed suicide, but Lee wasn’t in a position to try to protect someone else [by his death],” said a prosecutor. “Plus, the investigation has been focusing on possible corruption by the owner family of the Lotte Group, not on individual CEOs or other executives.”

Lee, Hwang and So were often called the “Big Three” of the group. They were in charge of many of the operations of the group and worked directly with Chairman Shin. 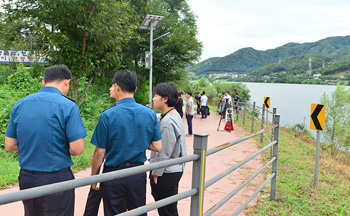 Prosecutors reportedly expected that questioning of the Big Three would reveal secrets of the group, which is accused of running a 30 billion won ($26.92 million) slush fund at Lotte Engineering and Construction and restricting business opportunities to the group’s affiliates. The Shin family is also accused of evading taxes totaling some 600 billion won.

Before Lee’s death, prosecutors were planning on summoning Shin Dong-bin, chairman of the group, and his brother, Shin Dong-joo, around next week. That schedule may change, according to prosecutors.

The probe into possible corruption at the Lotte Group started to speed up in recent months. In June, prosecutors raided Lotte affiliates including Lotte Hotel, Lotte Shopping, Lotte Chemical and Lotte Engineering and Construction, and homes of executives, including that of Lotte Group Founder Shin Kyuk-ho and Chairman Shin Dong-bin.

“Prosecutors were hoping to press charges against the Shin family before Chuseok,” said a prosecution official. “But that seems more difficult after what happened.”

Lotte executives were in a state of shock at Lee’s suicide. One of them said he couldn’t figure out why Lee made “such an extreme choice.”

“Vice Chairman Lee took great pride in Lotte Group’s contribution to the national economy,” said another, “and he has been agonizing over the damage to its image in the aftermath of the family feud over control of the group and the prosecutors’ probe.”

“It’s hard to believe Vice Chairman Lee, who devoted himself throughout his life to laying the groundwork for Lotte, has passed away,” said Lotte in a statement.

Starting work at the Lotte Hotel in 1973 and making his way through the ranks in the Lotte Group, Lee worked for the group for 43 years. He is the only non-Shin family member to have made vice chairman, and was often described in the media as having the trust of Lotte Group founder Shin Kyuk-ho and Chairman Shin Dong-bin.

Some conjectured that Lee was under severe psychological stress.

“Lee was the No. 2 man of the Lotte Group, receiving reports on everything,” said an employee of the Lotte Group. “Perhaps he made the extreme choice because he felt he needed to take responsibility instead of Chairman Shin.”

In fact, prosecution probes are often called off abruptly after a suicide in Korea.

Former Keangnam Enterprises CEO Sung Wan-jong killed himself during a prosecution probe last year, also on the day he was to be questioned. Sung faced charges of embezzlement and fraud. A Seoul police officer killed himself in 2014 when he was being probed for leaking Blue House documents that detailed a behind-the-scenes power struggle that revolved around Chung Yoon-hoi, a shadowy former aide to President Park Geun-hye.

Former President Roh Moo-hyun committed suicide in 2009 after being investigated by the Supreme Prosecutors’ Office for charges of receiving bribes. Chung Mong-hun, chairman of Hyundai Asan Corporation, jumped from an office building in Seoul in 2003 in midst of a prosecution probe into his involvement in illegal money transfers to Pyongyang to arrange a summit.