How big Japanese firms reinvented themselves

How big Japanese firms reinvented themselves

Japanese manufacturers are coming back to life after the country’s so-called lost decades.

The country’s economic indices are still barely recovering, but venerable companies have found ways to survive, although some involved painful transformations.

Fujifilm Corporation, founded in 1934, has made a powerful comeback after its film business struggled with the advent of digital cameras.

The company used to sell half the world’s film, with the other half sold by Kodak, the giant American player. When digitalization started transforming the market in the late 1990s, Fuji’s future was at stake. By the 2000s, it had a totally new product portfolio.

Based on the technology it built up for decades to make film, Fuji started developing materials for liquid crystal display (LCD) televisions. It also entered the cosmetics and medical sectors, using its experience in synthesizing chemical substances.

The company’s revenue jumped from 1.4 trillion yen ($13.9 billion) in 2000 to 2.5 trillion yen last year. The operating profit last year was 190 billion yen, close to its record profit of 207.3 billion won in 2007, just before the global financial meltdown.

The imaging solutions business, or film sales, which accounted for 54 percent of total revenue in 2000, now accounts for only about 15 percent.

Innovation at Fujifilm is displayed at the Open Innovation Hub located in the company’s Tokyo headquarters. From film materials, pharmaceuticals to cosmetics, all its 50 product portfolios are exhibited in the center. Companies trying to enter new businesses or transform their lines of business visit the hub for inspiration ? and some actually go into business with Fujifilm itself.

When the JoongAng Ilbo visited the hub on June 15, staffers demonstrated how TV displays are improved by using the company’s LCD materials. “So far, 4,000 people from 750 global companies have visited this place and 10 percent of them were willing to open new business based on our technologies or ink partnerships with us,” said Genji Kojima, the director in charge of the center. 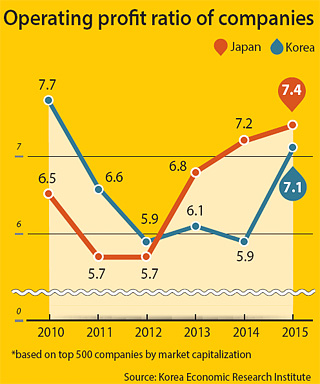 The lobby of Honda’s headquarters in Minami-Aoyama, Tokyo, the following day had another display of Japanese-style innovation.

A model of a jet developed with Honda’s own technologies stood in the lobby. The actual jet can fly 778 kilometers an hour with 20 percent more fuel efficiency than average jet planes. It is priced at $4.5 million and after its initial flight in April 2015, more than 100 units have been sold. Though Honda is originally a motorcycle and automaker. Now it is expanding into businesses of the future, including jets, humanoid robots (like the Asimo) and artificial intelligence.

Another Japanese company with a long history is Toray Industries, which develops and manufactures a range of chemical products, including carbon fiber. Its core product is rayon, a fiber produced from purified cellulose. However, the company kept changing its core products before each business reached its peak.

The company changed its major focus from fiber to plastics then to carbon fiber, electronics materials and water treatment membranes. Regardless of changes in the industry landscapes, Toray put consistent effort into developing carbon fiber for more than 30 years after it listed the product as one of its future growth engines.

It teamed up with Japanese fast-fashion brand Uniqlo to develop materials for the brand’s seasonal clothing: fibers that kept people warm, cool or dry.

That partnership dates back to roughly 10 years ago.

Japanese companies have greatly improved their operating-profit-to-sales ratios over the years. Korea used to have higher ratios than Japan, but that situation has flipped. Last year Japan had an average 7.4 percent while Korea recorded 7.1 percent, according to a Korea Economic Research Institutes analysis of both country’s top 500 companies by market capitalization.

Abenomics, the economic policies championed by Prime Minister Shinzo Abe, has added to the recovery.

“Some say Abenomics has failed as the economic slowdown in Japan continues,” said Lee Hyung-oh, business professor at Sookmyung Women’s University. “However, the policies have definitely cheered up the overall atmosphere in the country.”

To further ramp up the economy, the Japanese government is pushing companies into developing future growth engines, especially autonomous cars and robots. The government recently connected six of its local automakers - including Toyota, Nissan and Honda - with six parts makers such as Denso and Panasonic to jointly develop eight autonomous vehicle-related technologies.

As for robots, Japan has been focusing on the sector for more than a decade. Honda’s humanoid robot Asimo or the artificial intelligence program Pepper co-developed by French company Aldebaran Robotics and Japan’s SoftBank, are notable results of the years of research.

“The power of Japan lies in the bold drive by its government to ramp up the economy and innovation by companies with their strong foundations in basic science,” said Jung Joon-myung, former CEO of Samsung Japan and current advisor to Korean law firm Kim & Chang. “Korea needs to learn from the painstaking moves by Japanese companies as it enters a phase of economic slowdown.” BY KIM KI-HWAN,