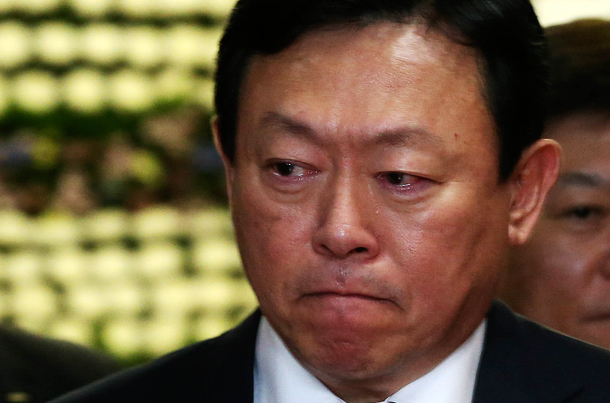 Prosecutors called a temporary halt to all investigations surrounding Lotte Group until Tuesday, saying they would wait until the funeral for Lotte Group Vice Chairman Lee In-won wraps up.

The announcement on Sunday to place a hold on a months-old investigation of Korea’s fifth-biggest conglomerate came two days after Lee committed suicide on a hiking trail in Yangpyeong County, Gyeonggi.

Many top Lotte executives who were supposed to be questioned this week have been appointed as members of Lee’s funeral committee, complicating the investigation, authorities said. When the probe resumes, Chairman Shin Dong-bin and his brother, Shin Dong-joo, will likely be grilled for the first time in the crackdown over suspicions of creating massive slush funds. Lee hanged himself just hours before he was supposed to appear at the Seoul Central District Prosecutors’ Office for questioning.

The 69-year-old vice chairman was often described as the second-in-command of Lotte Group after Chairman Shin Dong-bin, and the company’s most powerful figure outside of the Shin family, managing operations at most Lotte affiliates.

In a three-page suicide note left in his car, which was parked nearby, he wrote there were no slush funds at Lotte Group, and that his boss, chairman Shin, was a “great person.”

Lee had been investigated surrounding his involvement in creating slush funds at Lotte Engineering and Construction, in addition to other corruption charges. Authorities suspect the company stashed away at least 56 billion won (about $50 million) since 2002, an accusation several Lotte insiders acknowledged.

As Shin Dong-bin visited the mourning altar for Lee at Asan Medical Center in Songpa District, southern Seoul, on Saturday morning, his eyes welled up as he talked with his close aides and Lee’s son for about an hour.

Shin didn’t respond when throngs of reporters asked how he felt, but took out a handkerchief and covered his face in grief. Lotte founder Shin Kyuk-ho has yet to visit. Lotte Group’s public relations team said in a statement over the weekend that if he does drop by, he would probably do so Monday. If not, the 93-year-old business mogul could pay his respects through a message of condolence.

Lee Dong-yeol, a senior prosecutor at the Seoul Central District Prosecutors’ Office, stressed that the investigation’s scope and overall direction has already been drawn out, and that “none of it will change.”

“Over the past two and half months, we’ve collected a lot of material evidences,” the official said.

The Lotte investigation was launched in June, when nearly 200 investigators from the prosecution were dispatched to raid Lotte headquarters, at least seven affiliated companies and executives’ residences. The focus was on the Shin family’s alleged creation of slush funds, embezzlement and corporate malpractices.

So far, the executive director of the Lotte Scholarship Foundation and eldest daughter of Lotte’s founder, 74-year-old Shin Young-ja, has been indicted on corporate malpractice and embezzlement charges, becoming the first and only member of the family to be formally accused by the state.