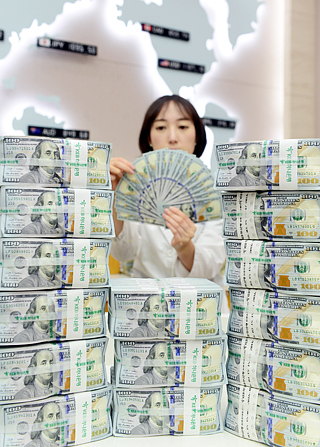 A dealer at KEB Hana Bank in Myeong-dong, central Seoul, counts dollar bills on Monday. Korea’s won weakened 1 percent to 1,125 won per dollar as bets that the U.S. Fed could possibly raise interest rates as soon as next month strengthened the dollar. Janet Yellen, the Federal Reserve’s chairwoman, said last week that the possibility of raising the federal funds rate “has strengthened in recent months,” citing solid performance in jobs, economic activity outlook and inflation. There’s even speculation in the market that the Fed will raise the interest rate twice before the end of the year. [NEWSIS]