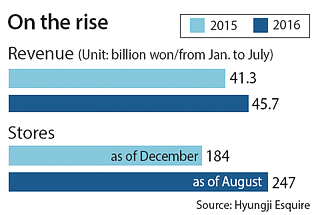 Established in 1961, Esquire was the first domestic shoemaker to reach 10 million won in exports in 1981. In 1993, it recorded 700 billion won ($624 million) in revenue. After going through financial difficulties, Esquire was bought by a private equity group in 2009. In June 2015, fashion group Hyungji acquired the company. Kang Soo-ho, a former CFO of Hyungji, became CEO. Since Kang’s arrival, the company has been trying to rebuild itself, increasing its number of stores from 184 to 247 and building relationships with other companies. As a result, a 10 billion won yearly loss was reduced to 3.5 billion won this year.

In terms of product development, Esquire focused on making products with high quality and a low price. The Jean Charles de Castelbajac brand is named for the French fashion designer, also known as JC/DC, who participated in product design. He is famous for having designed for Pope John Paul II and Lady Gaga.

The brand’s first store in Hyundai Department Store opened last Wednesday. Prices range from 100,000 won to 500,000 won, which is relatively cheap compared to other accessory brands displayed in department stores.

To keep prices low, Esquire contacted domestic manufacturers that supply for global luxury brands and deal with them directly rather than through a middleman to lower the production costs. The company also managed to lower commissions paid to Hyundai Department Store by offering the store space to all shoppers as an art gallery and lounge.

Some analysts wonder if the low-price strategy will succeed. “We are actually narrowly avoiding a loss,” said Kang. “But we decided that enhancing cost-effectiveness would be the only way to attract customers.”

Kang’s expects profit to follow once the brand gains popularity and sells in large volume. Next, the company is planning to bring the brand to China. Hyungji has trademark rights to the name “Castelbajac” in Asia except Japan.