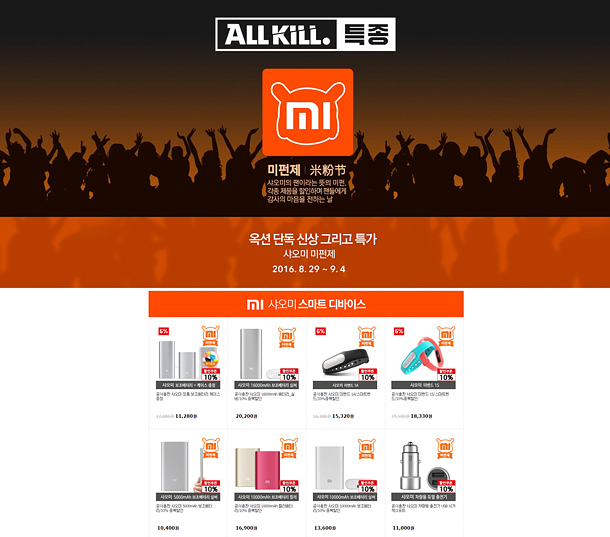 Xiaomi is offering discounts on a range of its products and unveiling some gadgets earlier than in China from Monday through Sept. 4 on Auction, an online commerce platform and a Korean unit of eBay.

A Xiaomi TV, fan, multi-plug port, electric water kettle, water purifier and VR headset - which is sold under the Mi brand name - will be available at discount prices during the period. The water purifier was not available in Korea before due to complicated certification process.

The VR gadget is being sold here before its release in China.

Auction is also picking one specific product each day in a limited volume for sale at a huge discount. The products range from a Korean-language edition of the Mi Band 2, Mi Air 2, a scale, an LED Smart Stand and the Ninebot Mini Pro 260 and a miniature Segway.

Auction has dubbed the event the Korean edition of the “Mi fen” festival, which has been taking place every April 8, its founding day, in China. The phrase “Mi fen,” which means “rice flour,” is also short for “Xiaomi fan” - a term Xiaomi has devised for its loyal supporters, the equivalent of Apple or Google’s fanboys.

“Xiaomi is beloved by not only Chinese consumers but also Koreans who appreciate its excellent cost effectiveness and quality,” said Kim Seok-hoon, a managing director at Auction. “The Mi Fen festival in Korea will become a good opportunity for consumers to buy various Xiaomi products at reasonable prices.”

Xiaomi’s products such as big portable battery packs were already available at various online shopping malls in Korea, but it officially entered Korea - as copycats rapidly undermined the market - by forging sales partnerships with Youmi in March and KomaTrade in May.

The latter and Auction are collaborating on the Korean Mi Fen festival.