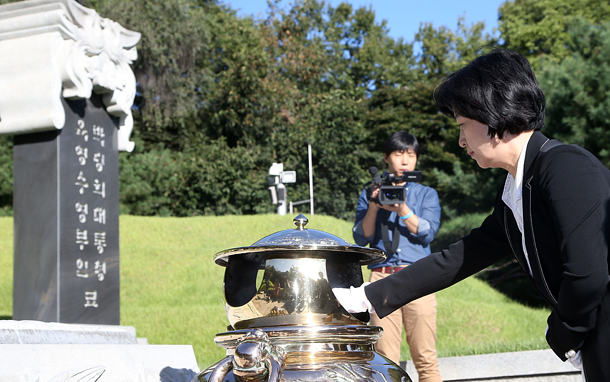 Choo Mi-ae, new chairwoman of the main opposition Minjoo Party of Korea, pays respects at the grave of the late President Park Chung Hee, father of incumbent President Park Geun-hye, in the National Cemetery in Seoul on Monday. Choo and new Supreme Council members of the Minjoo Party also paid their respects to the other former presidents - Kim Dae-jung, Kim Young-sam and Syngman Rhee - in the cemetery. “The late presidents will join forces to help us resuscitate democracy and revive the economy for people’s livelihoods. Each era has its own task to tackle. It is time to revive the economy for the sake of people’s livelihoods and it is time to unify the people of the Republic of Korea,” said Choo to reporters. At the first Supreme Council meeting on Monday, Choo criticized President Park for dividing the people instead of unifying them.[JOINT PRESS CORPS]