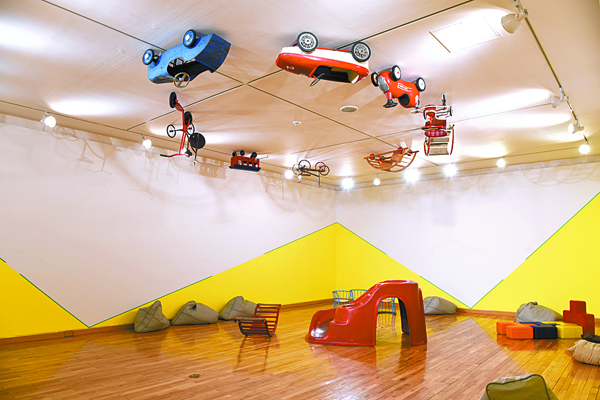 
To Sept. 11: The exhibition features a large array of furniture for children, focusing on chairs and desks by internationally influential 20th-century designers including Peter Keler, Luigi Colani and Renate Muller, as well as contemporary works by Korean designers. Visitors are allowed to sit on most of the chairs on display.


Designs from Korean artists and brands are displayed on the second floor of the museum. The basement floor of the museum is dedicated to displaying a range of desk and chair designs for young students that date back to 1930. Meanwhile, the highlight of the exhibition for kids is the ball pit on the first floor. Here kids can take off their shoes and jump in to play while parents take more time to look around the exhibition. 
To Sept. 25: Lee Yong-baek, 50, in his first solo show in Korea in eight years, presents four new pieces: two installations, one sculpture and one video piece. The video piece “What Makes the Earth Go Around” could be considered the highlight of the exhibition. It shows an illuminated globe, which anyone could buy online, in a darkened studio. With the “bang” of a gunshot, the globe breaks and begins to spin from the force. The shooting continues, destroying various countries on the globe’s surface and reminding viewers of bombings happening around the world as they watch.


Lee also shows three upgraded versions of his famous works including the video piece “Angel Soldiers,” which wowed international audiences when he represented the Korean Pavilion at the 2011 Venice Biennale.


Admission is free. The gallery is closed on Mondays. Go to Anguk Station, line No. 3, exit 1, and walk for 10 minutes.


To Oct. 23: The exhibition intends to show the creation process of British star designer Thomas Heatherwick and his team famous for the iconic U.K. pavilion for the 2010 Shanghai Expo in China and the Olympic cauldron for the 2012 London Summer Games.


The show features an extensive archive of 1:1 scale prototypes, models, test pieces, drawings and photographs for their hit works including not only the two above but also the Rolling Bridge in London, the Learning Hub building in Singapore and the new London bus.


Heatherwick’s famous Spun chairs have been specially produced to spin automatically for this exhibition.


Admission is 8,000 won for adults. The museum is closed on Mondays. It is located at Dokseodang-ro 29-gil in Yongsan District, central Seoul. There is no nearby subway station.


From today to Nov. 20: Under the odd title “Neriri Kiruru Harara,” the SeMA’s biennial festival focused on new media art, Media City Seoul, kicks off at the museum’s four branches. The theme of this year’s festival is the future of humans, which is “seen through the language of art and media from neither a utopian nor dystopian view,” according to Beck Jee-sook, the biennial’s curator, during an event in March.


Sixty-one teams of artists from 23 countries will participate in Media City Seoul. They include many female artists from non-Western countries including Mounira Solh of Lebanon, Cinthia Marcelle of Brazil and Cha Jae-min of Korea, as well as famous male Western artists such as Pierre Huyghe of France and Ugo Rondinone of the United States.


The museum is closed on Mondays. Go to Seoul City Hall Station, line No. 2, exit 10 and walk for five minutes.


AS THE MOON WAXES AND WANES


To Feb. 12: The National Museum of Modern and Contemporary Art (MMCA) started to grow its collection in earnest 30 years ago at its Gwacheon branch. To celebrate the anniversary of the opening of the Gwacheon branch, the museum is holding a large-scale exhibition, which takes up the entire MMCA Gwacheon space. The exhibition features 560 pieces of artwork and documents, most of which are part of the collection, while others are newly commissioned.


The exhibits range from familiar works by Korea’s most admired artists such as painters Kim Whan-ki, Park Soo-keun and video art pioneer Nam June Paik, to works that have not been exhibited for decades for a variety of reasons. Works by famous foreign artists and hot Korean contemporary artists are seen in the “Interpret Par 2 - Relation” section.


Admission is free. The museum is closed on Mondays. Go to Seoul Grand Park Station, line No. 4, exit No. 4 and take the shuttle bus.