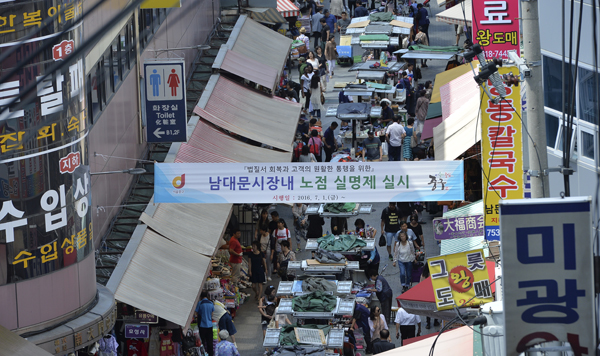 A banner hung in the middle of the Namdaemun Market in central Seoul announces commencement of the so-called real-name vendor ownership system, a policy implemented by the Jung District Office last year. The policy limits the number of street vendor spots to one per vendor, in order to shut down the illegal black market of vendor spots and free up more space for pedestrians. [KIM HYUN-DONG]

In what should have been a still and quiet Monday morning on the crooked streets of Namdaemun Market, vendors rushed about to open their street shops at an unusual hour.

The operation of street stores at Korea’s largest traditional market in central Seoul starts from 5 p.m. during weekdays, an unwritten rule that vendors and the Seoul city government agreed to in 2009. But vendors were not breaking the rule to make more money. They were making a statement against a government regulation that commenced last year, which limits the number of shops any particular vendor can have to just one.

Reports have been made concerning some Namdaemun Market managers who would charge excessively high rent to vendors for their vending spots and threaten to shut their business down if they did not pay up. These managers, acting more like street thugs, have been rounded up by authorities from time to time but the practice was so widespread that it was hard to put a significant dent in it.

“The real-name vendor ownership system will shut down the illegal black market of vendor spots and create more pedestrian spaces for shoppers,” said an official of the Jung District Office. “The policy will be implemented to all vendors from September.”

There are currently some 190 vendor spots being operated in the streets of the market. Implemented in specific places starting last year, the new regulation will take strict action against non-compliers. In May of last year, 16 market street shops were forcibly shut down after vendors refused to keep to the one-shop-per-vendor regulation. If a vendor breaks the rule three times, he or she cannot open up a shop at the market ever again, according to the Jung District Office.

Not all vendors are refusing to comply with the policy ? 80 vendors registered their names to the Jung District Office in July and received official permits. Yet others, including a 69-year-old vendor surnamed Kim, remain opposed to the regulation.

“One of the regulation rules is that you have to re-apply for the vendor spot every three years,” Kim said. “I have had this underwear street shop for 30 years, and the money I made allowed me to take care of my sick husband, who had a stroke.”

The Jung District Office plans to forcibly shut down all vendors who do not register their names with the office from September. A type of rivalry between street vendors and shop owners inside buildings plays into the fray, too.

“I am friends with many of these street vendors because I’ve been in this business for the past 30 years,” said a 66-year-old storekeeper of a shoe store inside a building at the market. “But the more these street shops open, the fewer customers find my place.”