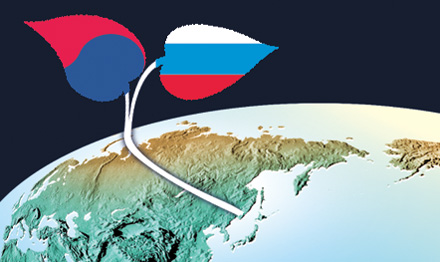 The cynicism of imperial Russia that had ignored Korea’s desperate call for help in the early 20th century has changed into desperate courtship. The journey for the Peace Odyssey 2016, a six-day trip across Russia’s Primorsky Kray, confirmed the reversal in Korea-Russia relations in the last century. That’s an amazing thing.

Deputy Prime Minister Yury Trutnev, in charge of developing Russia’s Far Eastern District, was eager to create multiple industrial complexes adjacent to North Korea. After the Ukraine crisis, Russia has lost Europe due to EU and U.S. sanctions, and it plans to invest 22 trillion rubles ($337.4 billion) in the Far East by 2025. Seoul National University professor Shin Boem-sik said Russia cannot give up cooperation with Korea, an ally of the United States, in order to check China’s expansion in Asia while it is pitted against the U.S. globally.
Economic cooperation with Russia could lessen Korea’s dependency on China, and it is also an opportunity to ease the ominous new Cold War structure ignited by North Korea’s nuclear threat. When the seeds for industrial complexes are planted, Primorsky Kray will become the center of peace where South and North Koreas, China, Russia and Japan can hold hands. Of course, this is based on the premise of a solid Korea-U.S. alliance. Russia will be paying attention to President Park Geun-hye’s facial expressions at the summit meeting with Russian President Vladimir Putin when she attends the second Eastern Economic Forum in Vladivostok. This is the power of Korea’s economic growth and charm.

Vladivostok is the gateway to the Far East. In Russian, it means “The Lord of the East.” It is an irony of tragic history that Korean Emperor Gojong had attempted to get out of Japanese rule and seek asylum in the city named “the Lord of the East” in June 1910. With the help of Gando Governor Lee Beom-yun and volunteer soldiers in Hamgyeong Province, Gojong tried to escape from the Korean Empire and settle in Vladivostok, so he sent Captain Hyeon Sang-geun and Seobuk Academy official Lee Gap to Goier, the Russian commercial attaché in Shanghai, delivering a message of his intention to seek exile.

However, Russia had just been defeated in the Russo-Japanese War, and Emperor Nicholas II rejected Gojong out of concern that it might harm its relations with Japan. Right before the Russo-Japanese War in 1904, Gojong declared neutrality, and in 1907, he sent Lee Jun, Lee Sang-seol and Lee Wi-jong to The Hague to expose the coerciveness of the Eulsa Treaty and nullify it. But the great powers there turned away from the small and weak Korean Empire. Vladivostok still has the features of the old city, reminding Koreans of the tragic moments of the Korean Empire. Gojong wished to make this foreign city a base for the anti-Japanese movement. Lee Jun and Lee Sang-seol left for The Hague. Independence fighter An Jung-geun left for Harbin to assassinate Ito Hirobumi.

The humiliation by foreign forces that started in the late 19th century was a result of the Joseon Dynasty’s ignorance and powerlessness over the international situation. Korea had trusted the United States after signing the Treaty of Peace, Amity, Commerce and Navigation, but the United States had made the Katsura-Taft Agreement and allowed Japan to take over Joseon. Emperor Gojong sent a letter to Nicholas II to seek asylum and pleaded for opposition to the annexation, but Russia had already given up on Joseon through the Russia-Japan Treaty. History proves that treaties — and friendship without power — are painful love letters of the abandoned.

Russia’s courtship of Korea is sweet. In the Eastern Economic Forum that Putin personally presides over, the primary VIP is President Park, not Japanese Prime Minister Abe. Some Russians propose that Koreans should be given the same status as Russians to encourage advancement in the Far Eastern districts to discourage China’s expansion. But just as Russia had done to Korea a century ago, things will change immediately if Korea turns away from Russia, because Russia will have to choose China, not Korea, as its partner. This is the worst-case scenario, with the Korean Peninsula being swept up into the vortex of a new Cold War, and Korea once finding discovering that it cannot control its own destiny.

Primorsky Kray is the place where Putin’s new eastern policy, Xi Jinping’s “One Belt One Road,” and the Northeast Passage will change the direction of the 21st century and meet President Park’s Eurasia Initiative. When the model of peace and coexistence is set up here, Korea will be the hub of East Asia. When we connect the continental powers of China and Russia and the marine powers of the United States and Japan, Korea can at last escape being “islanded” by nuclear North Korea.

Countries that exchange people and goods constantly don’t go to war easily. This will be Korea’s equation for survival, holding hands with Russia and China in Primorsky Kray and increasing foreign dependency on the North Korean economy. Naturally, it is essential to persuade the United States and include Japan. To become the protagonist of Northeast Asia, we need to charm our neighbors.


*The author is the chief editorial writer of the JoongAng Ilbo.