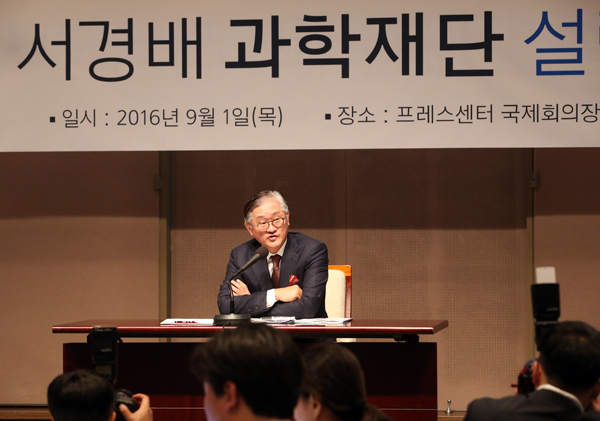 Suh Kyung-bae, chairman and CEO of AmorePacific, announces his plans for a foundation supporting young researchers in the life sciences during a media briefing at the Seoul Press Center in central Seoul on Thursday.[CHOI JEONG-DONG]

AmorePacific Chairman and CEO Suh Kyung-bae has pledged 300 billion won ($268 million) of his personal assets to a foundation supporting young researchers in the life sciences, the company announced Thursday.

The SUH Kyungbae Science Foundation was officially established on July 11 and obtained approval to operate as a nonprofit from the Ministry of Science, ICT and Future Planning on Aug. 4 under the mission of “fostering creative life scientists and laying the foundation for human development.”

Each year, the foundation will select three to five Korean scientists from at home and abroad to each receive a maximum of 2.5 billion won over a period of up to five years. Some of the beneficiaries who display outstanding performance during this initial period will receive an extended period of support, according to AmorePacific.

The screening process will be completed by a group of scientists who will serve as managing directors at the foundation. They will focus on the creativity, impact and research capacity of candidates and their projects.

The foundation plans to issue a call for applications in November and decide on the first batch of beneficiaries by next June.

“Society cannot achieve growth without the development of science and technology,” Chairman Suh said at a press conference on Thursday.

“One of my biggest pleasures when I was young was watching ‘Astro Boy’ [a Japanese sci-fi animated series about the adventures of an android]. I loved biology classes, too. I realized the power of science after growing up and running a company.”

The foundation is poised to earmark around 15 billion won per year over the next two decades, and the chairman plans to sell some of the preferred shares he owns in the company to raise funds.

Suh, the 53-year-old second son of AmorePacific founder Suh Seong-Hwan and heir to the cosmetics company, owns a 51.34 percent stake, as of Aug. 1, that is valued at over 8 trillion won, making him Korea’s second-richest man after Samsung Chairman Lee Kun-hee.

Suh told reporters that he plans to spend more of his personal money later on - up to 700 billion won - to see the foundation run for up to a century from the present day from a total 1 trillion won fund.

In the longer run, the foundation says it hopes to be able to expand the range of beneficiaries beyond scientists of Korean descent to researchers around the world.