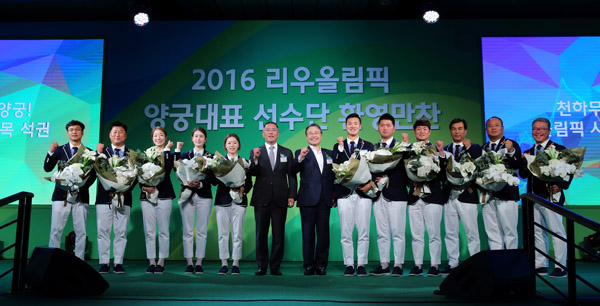 Hyundai Motor Group and the Korea Archery Association held a dinner party Thursday to celebrate the victory of the Korea archery team for the 2016 Rio Olympics.

The national team archers and coaches were granted a reward, and in return, they gave a commemoration gift in the form of 4 gold medals to express their gratitude to the Hyundai Motor Group who supported them for the last 32 years.

Hyundai Group is cited as a huge contributor for the development of archery in Korea, which is now one of the sports that wins the most medals in the Olympics every four years.

In 1985, CEO Chung Mong-koo became the president of the Korea Archery Association. Until 1997, he served four terms and became honorary president in 1997. The family’s affection for archery started with his father and the founder, Chung Joo-young, who became group director for the archery team in 1982.

Apart from developing talent and enhancing awareness about the sport, one of Hyundai Group’s biggest contributions to archery has been the implementation of science to help develop players’ skills.

Hyundai frequently examines and encourages the development of equipment used in training. Even among foreign players, archery equipment made in Korea is considered to be top quality.

To prepare for Rio, Hyundai developed training equipment and methods such as tailored bow grips and a training session measuring brain waves to help enhance concentration.