Hanwha to plant trees in China

Hanwha to plant trees in China 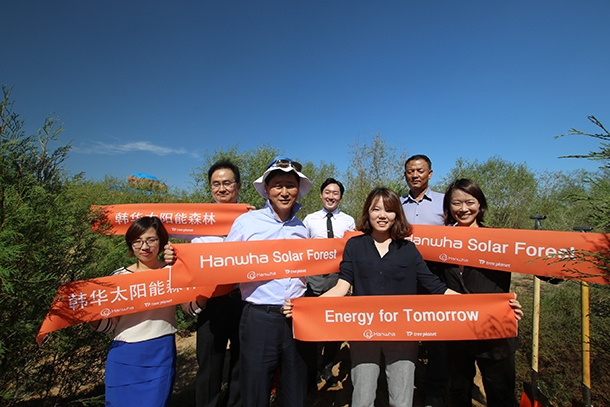 Hanwha will create the sixth “Solar Forest” in China’s Maowusu Desert in Ningxia province. On Thursday, Hanwha Group’s employees and officials of the Ningxia region got together to celebrate the project.

Through this event, Hanwha Group will plant 50,000 trees on 165,000 square-meters (40.7 acres) of land, which is equivalent to 23 soccer fields. To emphasize the “eco-friendliness” of this project, the energy used will come not from fossil fuels, but solar units that were donated by Hanwha.

Located in the northern center of China, the Maowusu Desert of Ningxia province is one of China’s biggest sources of yellow dust and is closely watched by the Chinese government due to the area’s rapid desertification.

Hanwha’s Solar Forest project started in 2011 alongside the social enterprise Tree Planet. Through the campaign, 440,000 trees were planted in Korea, Mongolia and China. With the sixth on its way, the total areas where Hanhwa has planted trees will measure 1.33 million square meters (328 acres).

The aim of the campaign is to put an end to the expansion of deserts and raise awareness regarding climate change and others environmental issues among young people.

Anybody can participate, even if they are not a Hanwha employee. If a participant plants and grows trees on the phone application, “Tree Planet,” Hanwha will plant the equivalent amount of trees in desertified areas. People can also send trees for the campaign by writing encouraging posts on the campaign website at www.hanwhasolarforest.org.

“As a company that takes social responsibility seriously, we believe counteracting climate change and environmental problems is one of our missions,” said Choi Sun-mok, vice president of Hanwha Group and head of the group’s communication team.