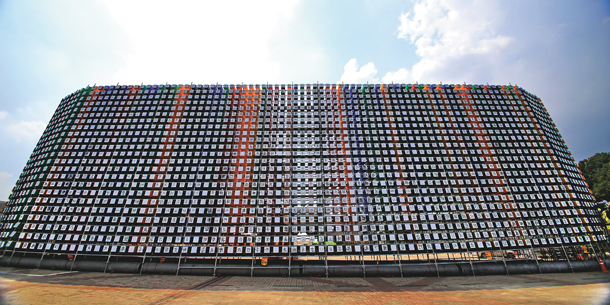 The “Jikji Wall,” located in the courtyard of the Cheongju Arts Center in North Chungcheong, acts as the main gate of the inaugural Jikji Korea International Festival that kicked off Thursday. The installation, designed by artistic director Jeon Byung-sam, measures 87 meters (285 feet) in length and 12 meters in height. The wall consists of 8,000 plastic boxes with Chinese characters found in “Jikji,” the oldest extant book printed in Korea with metal movable type in 1377. [JIKJI KOREA ORGANIZING COMMITTEE]

CHEONGJU, North Chungcheong - Johannes Gutenberg may be known around the world as the man who introduced the printing press to Europe, but this city 70 miles south of Seoul is hoping to be recognized as the world’s birthplace of movable type.

Part of that effort is the Jikji Korea International Festival, a weeklong art exhibition that kicked off in Cheongju on Thursday, and makes use of the city’s role as home to the oldest extant book printed in Korea with movable metal type. “Jikji,” the abbreviated title of “Jikji Simche Yojeol,” was printed in the city’s Heungdeok Temple in 1377, predating the famed Gutenberg Bible by 78 years.

The Jikji Korea International Festival, being held this year for the first time, includes an exhibition of work by international artists that relate to “Jikji” and printing technology as a whole, with the goal of helping visitors understand how the book and the invention of printing changed humankind.

Ever since the existence of “Jikji” was discovered in the early 20th century, Korea has been campaigning vigorously that, although this Buddhist document had been limited to noblemen, the metal movable printing technique had been invented not by Gutenberg in Germany but here in Korea, in Cheongju.

The significance of “Jikji” was recognized internationally when it was listed as part of Unesco’s Memory of the World Program in 2001. The international organization even established the Jikji Memory of the World Prize in 2004, a biennial award given to an individual or group who has contributed to preserving documents and promoting their heritage.

“Jikiji” was originally printed in two volumes, but today, only the second volume remains, and the document is stored in the National Library of France, after the institution acquired it in 1950 from a French minister.

“So far, Korea has been focusing on promoting ‘Jikji’ as the oldest book that predates the Gutenberg Bible by 78 years,” said Kim Seung-min, curator of the festival. “But we wanted to stress this time the significance of ‘Jikji,’ printing innovation and the whole idea of invention.”

Hosted by the Cheongju city government and organized by the Jikji Korea Organizing Committee, the weeklong international festival is taking place at the Cheongju Arts Center under the exhibition theme “Golden Seed.” 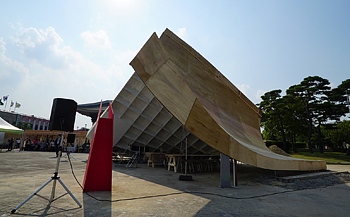 The “Jikji Pavilion,” by renowned industrial designer Ron Arad, has been built so that it can be dismantled then reassembled in other locations. The front cover can also be redesigned. [JIKJI KOREA ORGANIZING COMMITTEE]

The festival’s main exhibit includes art installations of diverse forms including video, painting, film and even an interactive virtual reality installation from 35 artists and groups from 11 different countries.

“Movable metal type printing allowed knowledge to be shared by many,” Kim said. “In the West, it played a crucial role during the Renaissance and Enlightenment and has allowed the dissemination of scientific knowledge.

The ‘Golden Seed’ of the exhibition title refers to the potential for knowledge to spread, the seed from which the modern world grew.”

Although the original “Jikji” is located in France, visitors can see the document’s 8,000 Chinese characters as they walk through the grand “Jikji Wall,” an 87-meter-long (285 feet) and 12-meter-high wall installed in the Cheongju Art Center’s courtyard that marks the entrance to the exhibition venue.

The installation was designed by the festival’s artistic director, Jeon Byung-sam, and includes 8,000 translucent plastic boxes, one for each Chinese character, with LED lights that are turned on after sundown during the festival to illuminate the “Jikji.”

After passing through the Jikji Wall entrance, visitors will encounter the “Jikji Pavilion” by world-renowned industrial designer Ron Arad. This large installation piece looks like an open book lying on a flat surface.

“The bound book has become so ingrained in our lives,” Arad said in a press release. “So I have chosen to celebrate it by creating a pavilion that looks like a book.”

“The thickness increases where the pages fan out, and the metal binding of the structure is derived from a traditional spine.”

Kim, the festival’s curator, added, “If all the works inside the main building are like the pages inside a book, this pavilion is like a cover of a book.”

Another piece of art to take note of hangs above the doorway to the main exhibition building, a piece by Ahn Sang-soo, known as the godfather of Korean typography, titled “Alpha to Hiut.”

“Alpha is the first character of the Roman script, the world’s oldest written system, and ‘hiut’ is the last consonant of Hangul, the Korean alphabet,” Kim said. “Surprisingly, in print, if you turn the alpha symbol counterclockwise, it becomes the symbol for hiut.’”

In the artist’s piece, a string of mirrors connects the alpha symbol with the symbol for hiut. For Ahn, “this embraces the range of human culture, the world from dusk to dawn,” according to Kim.

The festival’s main exhibition is divided into seven sections.

In the first “Prologue” section, artists including Choi Jeong-hwa, Lee Lee-nam and photographer Bae Bien-u display works that reflect the festival’s key ideas of “spirit, materials, technology and the teaching of ‘Jikji’ as well as its transcendental meaning in our digital age,” the festival organizer said.

The second section, “World’s View,” starts with a wall showing a digital timeline of the “Language of Printing,” devised by British art historian Beth McKillop.

In this section, valuable relics are on display, including a replica of the Pure Light Dharani Sutra, printed between 684 and 704, predating “Jikji,” as well as some examples of 15th-century printing in Hangul that demonstrates the Confucian transformation of Korea during the early Joseon Dynasty (1392-1910), such as the “Hunminjeongeum,” a guide to Hangul that was printed in 1446.

The third section, “Media Procession,” features a replica of Gutenberg’s printing press from the Gutenberg Museum in Mainz, Germany.

According to the organizer, a master in using the press from the Gutenberg Museum will demonstrate once a day during the festival how the machine is used. The press will be printing the first chapter of the Bible’s Book of John, and prints will be handed out to visitors.

Kwon Ji-an, more widely known as singer Solbi, is also participating in the festival as one of the artists with her mixed-media installation “Fiction & Non-Fiction SNS World,” which Kim says alludes to the proliferation of information.

On the outside of the Cheongju Arts Center’s main building, one corner from first to third floor has been decorated with stained-glass windows, an artwork by British duo Brigitte Stepputtis and Phil Dobson titled “Gutenberg Galaxy.” Translucent paintings of different alphabets overlapping each other are plastered on the windows to give them a stained-glass look.

South African artist William Kentridge’s participation has also been the talk of the town. His video installation “Notes Towards a Model Opera” (2015), which explores the intellectual, political and social history of modern China using images of old maps and Chinese texts, is on display in the arts center’s basement level.

Organizers of the Jikji Korea International Festival also used the event to present this year’s Jikji Memory of the World Prize. On the festival’s opening day, the prize was given to the Iber Archives, an institution established by Latin American countries in 1999 to preserve documents. The Iber Archives competed with about 40 other institutions from 30 countries and was awarded $30,000 in prize money.

On Saturday, a roundtable meeting of past prize winners, including the National Library of the Czech Republic, which received the prize in 2005, was held to “foster cooperation among the awardees and help stress the importance of documentary heritage,” according to the festival organizers.

“Although this is a ‘Jikji’ festival, I didn’t want to put out ‘Jikji’ in every artwork,” Kim said. “That does not appeal to the international audience.

It’s difficult to relate to how innovative the invention of the printing press and the existence of ‘Jikji ‘is to modern people, but by indulging in the exhibited artworks that relate to ‘Jikji,’ we believe that people can understand how influential this innovation was, is and will be.”

From left to right: Windows in one corner of the main building are plastered with a stained-glass art piece titled “Gutenberg Galaxy” by British duo Birgitte Stepputtis and Phil Dobson; South African artist William Kentridge’s video installation “Notes Towards a Model Opera” (2015) is on loop in the art center’s basement level; and Korean artist Choi Jeong-hwa’s “Ohon - The Five Spirits” (2015) is on display in the first floor of the main building. [JIKJI KOREA ORGANIZING COMMITTEE]