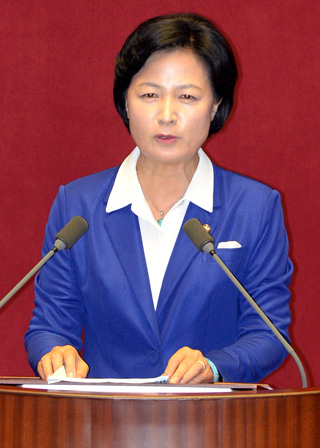 Choo Mi-ae, the new chairwoman of the Minjoo Party of Korea, proposed to President Park Geun-hye to hold emergency talks concerning people’s livelihood in a speech at the National Assembly on Tuesday.

In her first speech to the parliamentary negotiating body, Choo, a five-term lawmaker who became head of the main opposition at the end of last month, said that there is a “serious economic crisis,” blaming the cause on the government.

“President Park is forgetting the major industries that her father built,” she said. “We need to move past ideological and political camp principles and find a solution through politics.” She went on to propose such emergency talks to improve people’s livelihoods. “The opposition party,” she added, “in order to enable negotiation politics, needs to boldly make concessions when there is something to make a concession for.”

Choo chose to focus mainly on the economy and unity in politics to improve the livelihoods of the people, rather than ongoing political issues, such as the reform of the prosecution or the scandal involving Woo Byung-woo, senior presidential civil affairs secretary, who is accused of embezzlement and abuse of power.

Her speech is being received as a sign that she intends to actively cooperate, should the president take part in such talks.

If such talks do come to pass, they would mark the first between a female president and a female opposition party leader.

Choo proposed a raise in wages and tax reforms in her speech, adding that this is the time for large corporations to stand up for the people and the laborers that helped prop them up.

On the issue of the government’s decision to deploy the U.S.-led Terminal High Altitude Area Defense system to Korea, she said, “The Lee Myung-bak and Park Geun-hye governments abandoned the Sunshine Policy [of late President Kim Dae-jung] and took a policy of harsh wind against North Korea, so the rein over the North’s nuclear issue has been let loose and it became a monster.”

She added that the Thaad issue was a result of such harsh policies toward the North, as well as diplomatic incompetence.

But she also issued a “strong warning” to the North Korean government, adding, “the nuclear and missile program will only bring about the joint destruction of our people.”

The ruling Saenuri Party generally responded positively to Choo’s proposal to focus on the economy and Lee Jung-hyun, chairman of the party, said after the speech, “She spoke of things that can be take into consideration.”

But the People’s Party was critical of Choo’s proposal, and Son Kum-ju, spokesman for the party, said through a statement that the chairwoman “speaks of united politics,” acting as if the Minjoo Party is already the ruling party, “but generally only played the blame game with the president and government, as well as the ruling party.”