Thaad has North’s subs in a pinch

Thaad has North’s subs in a pinch 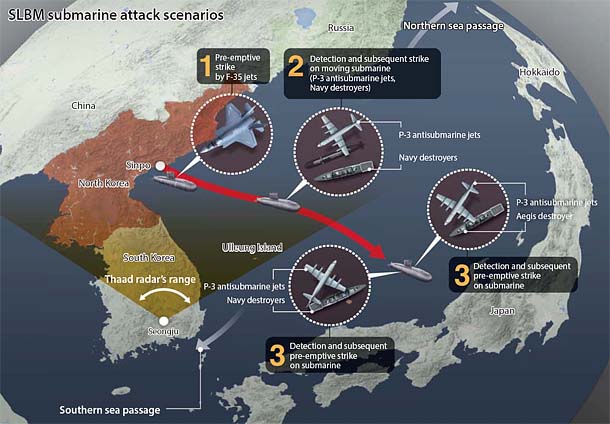 North Korea’s test-fire of a submarine launched ballistic missile (SLBM) on Aug. 24 from the port city of Sinpo put Seoul and its allies on edge, as it was perceived to have been a success.

In apparent celebration, North Korean leader Kim Jong-un issued an order for the construction of a submarine able to carry two to three SLBMs.

Because SLBMs are much harder to detect, since they are launched underwater and hence outside radar zone, some defense experts caution that the North’s development of submarine fleets with SLBM capability could be a game changer.

But as South Korea and the United States are going to set up the Terminal High Altitude Area Defense (Thaad) system in Seongju County, North Gyeongsang, such a submarine fleet’s threat will be limited to the southeastern part of the East Sea.

It is estimated that it would take at least 36 hours for North Korean submarines to reach a point in the East Sea free of the Thaad’s X-Band radar.

During the voyage, North Korean submarines would have to surface to recharge their batteries by running a diesel engine two to three times, raising the likelihood of detection by the South Korean Navy.

There are two sea routes a North Korean submarine could take to reach the Pacific.

One would be to the southern sea passage through the Korea Strait, which goes between Korea and Japan with a width of 200 kilometers and a depth of 90 to 100 meters.

But experts say a passage through the strait without detection by South Korean or Japanese navies would be virtually impossible given the concentration of naval bases and fleets in the area.

The South Korean Navy runs its operation command in Busan, and Japanese naval self-defense forces and the U.S. Navy run their destroyers in Sasebo naval bases in Japan near the Korea Strait.

The other available route is the northern sea passage between Russia’s easternmost island of Sakhalin and Japan’s Hokkaido.

But this, too, would be certain to fail as the maritime area is laden with underwater sonars that were deployed during the height of the Cold War.

One of the most effective ways to deter the North from attacking the South with an SLBM would be a pre-emptive strike on a submarine facility before a submarine with SLBMs departs for operation.

According to a report by the Defense Ministry to the parliamentary defense committee on Aug. 29, the Korean military already has just such a pre-emptive strike plan should the North show signs that it intends to make an SLBM strike.

The intelligence community in South Korea believes that Pyongyang is planning to put weapons of mass destruction such as chemical and nuclear warheads on SLBMs, an assessment that has led Korea and the United States to consider pre-emptive strikes if and when the North moves forward with a clandestine submarine operation for SLBM attacks.

But experts say making such a call would first require certainty that North Korea is on the path to a full-fledged war with the South.