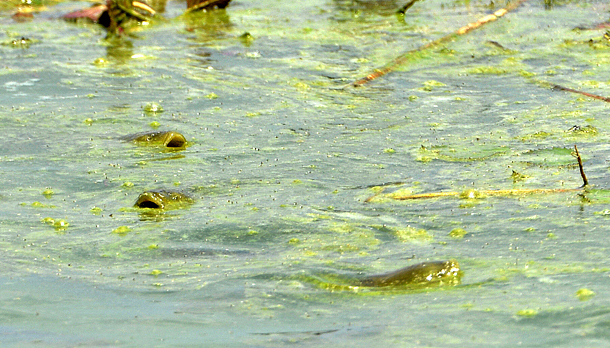 “It was unbearable to see,” said a friend who enjoys cycling. He had just returned from a trip to the Yeongsan River in South Jeolla. A bike path paved with a wooden deck runs along the picturesque river, a product of the 22 trillion won ($20 billion) fourrivers restoration project.

But his joyful ride was soon cut short. “When I looked down, I saw stagnant water filled with terrible algal bloom. They shouldn’t have made the bike path along the river. It was terrifying to see the green tide so up close.”

A video sent to me a few days ago by a junior reporter from the Nakdong River was equally shocking. Thick algal bloom gushed out when
fishers opened up a net full of grey mullet caught in the river. It was unbearable to broadcast the image. The algal bloom in the rivers is affecting the fish.

The phenomenon is spreading across the country. I often pass by the spot where the Anyang Stream meets the Han River when I go for a run or bike ride. The area is known for its sewage smell. Recently, the Seoul city government decided to send two ships to remove the algal bloom. Not even the Han River is free from the green tide.

There are various causes for algal bloom. In the Yeongsan River and Nakdong River, water reservoirs made them flow slower. This year’s heat waves aggravated algal bloom. The inflow of farming and domestic waste water is also a culprit.

The four-rivers project is also a clear suspect as one of the main causes. It’s been three years since construction has been completed, but the destruction of the ecosystem is worsening. It is great to make better use of the rivers by making bike paths, and it is important to control the water to prevent floods and droughts. But without healthy, flowing water, all of these things are useless.

A few years ago, I had a chance to visit several national parks while in the United States. It was the first country in the world to establish a national parks system to prevent individuals from owning and damaging natural environments. The country takes pride in its national parks as “America’s best idea.” The system deserves praise, and other countries have taken up the idea as well.

The National Park Service was established in 1916, and on Aug. 25, it celebrated its centennial. The American media highlighted the nature and ecosystems that the service has preserved for 100 years.

Of course, development and preservation are controversial topics in the United States. One can find roads, camping facilities and supermarkets at Sequoia, Kings Canyon and Yosemite. But in most cases, the national parks refrain from artificial modification of the environment, allowing visitors to respect, preserve and pass down nature’s beauty to the next generation.

When it comes to environmental policies such as the reduction of greenhouse gas emissions, the Korean government is world class and more eager than countries with more serious pollution problems. I want to ask the government why it doesn’t do the same for rivers where gray mullet are filled with algal bloom and with the water we drink every day.


*The author is head of the investigative reporting team for national news at JTBC.