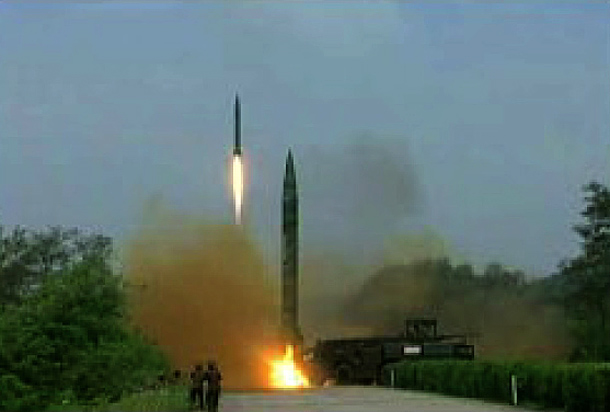 A photo carried by the North’s state-run Rodong Sinmun on Tuesday shows a missile taking off on a mobile launching pad in Hwangju County in North Hwanghae Province. [AP/NEWSIS ]

North Korea’s three ballistic missiles, which were test-fired on Monday and flew 1,000 kilometers (620 miles) before falling into waters controlled by Japan, were all launched within one minute of each other, a military official told the JoongAng Ilbo on Tuesday. If so, this marks yet another in a series of technological leaps by the regime.

The latest launch from Hwangju County in North Hwanghae Province differs from past launches in that, when firing multiple missiles, the North Korean military typically fires its second one 30 minutes to one hour after the first.

Experts think the launching of three missiles within one minute was intended to demonstrate that its missile attacks will now be significantly more difficult to intercept using the U.S.-operated missile defense system, or Terminal High Altitude Area Defense (Thaad).

“In the past, North Korea normally fired a second missile 30 minutes or one hour after the first,” remarked the official, who spoke on the condition of anonymity.

In one of the photos showing the Monday launch, disclosed by the state-run Rodong Sinmun on Tuesday, the first missile is seen lifting off from its mobile launching pad while the rocket of the missile next to it is seen to have already ignited.

Experts say it is harder to detect and confirm the trajectory of a flying missile if there are two missiles flying at the same time because it takes time to confirm whether they are two different missiles or one single missile that has separated into two parts.

In the wake of this rapid-fire launch, Japanese media reported that the Monday launches were meant for Pyongyang to demonstrate to Tokyo that the latter’s Aegis destroyers in the East Sea would have difficulty intercepting the North’s incoming missiles.

Yang Wook, a senior researcher at the Korea Defense and Security Forum, said that by showing the world that it was capable of launching a number of missiles simultaneously, the North sought to demonstrate its intention to test intelligence gathering capability on missiles by Seoul and Washington, as well as its confidence that it could still break though the missile defense system, especially a Thaad system in South Korea, scheduled to be set up by the end of next year in Seongju County, North Gyeongsang.