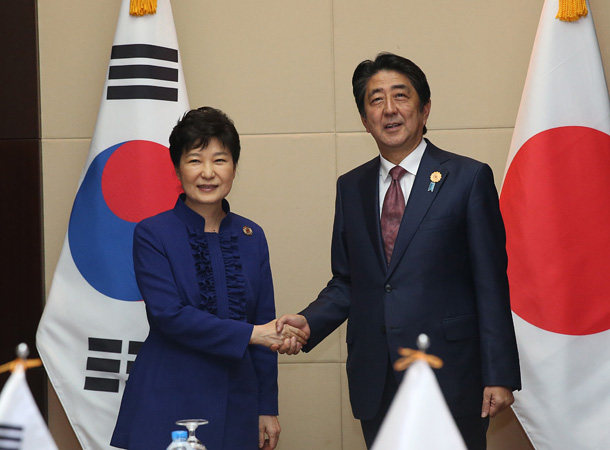 President Park Geun-hye, left, shakes hands with Japanese Prime Minister Shinzo Abe at a bilateral meeting on the sidelines of an Asean plus three summit at the National Convention Center in Vientiane, Laos, on Wednesday. [JOINT PRESS CORPS]

The two leaders’ third bilateral meeting took place on the sidelines of a series of regional summits for the Association of Southeast Asian Nations (Asean), which marks its 50th anniversary next year.

The leaders, over 30 minutes, discussed a coordinated response to North Korea’s continued provocations and putting additional pressure on the regime, as well as advancing bilateral ties, according to a Blue House official. Japan has especially been alarmed by North Korea’s latest ballistic missile test using mobile launchers, making detection difficult.

Wednesday’s meeting was the two leaders’ first meeting since Tokyo transferred funds to Korea as a part of last year’s deal to resolve the issue of the Japanese military’s forced recruitment of young women into sexual slavery during World War II.

This issue was a thorn in the two countries’ bilateral relations and, along with other historical issues, prevented a summit between Park and Abe for many months.

Park and Abe’s first formal talks after taking their respective offices took place at a trilateral summit in March 2014 in The Hague on the sidelines of a security summit, which was mediated by U.S. President Barack Obama. The two held their first bilateral talks only last November, as the two countries marked the 50th anniversary of normalization of bilateral ties.

Park and Abe’s bilateral summit comes five months after talks on March 31 in Washington on the sidelines of the Nuclear Security Summit.

This was a crucial step in the implementation of the Dec. 28, 2015 bilateral agreement struck by the two countries’ foreign ministries, which included an apology from the Japanese prime minister and a plan to establish a 1 billion yen fund for the victims taken from Japan’s state budget.

There was interest to see if Abe would propose to Park a trilateral summit also involving Chinese Premier Li Keqiang for as early as November, as reported in Japanese media. The trilateral summit is likely to be hosted in Tokyo and would mark both Park and Li’s first trip to Japan since they took office.

Over an eight-day trip that kicked off Friday and took her to Russia, China and Laos, Park completed a series of bilateral summits with the leaders of the four major powers.