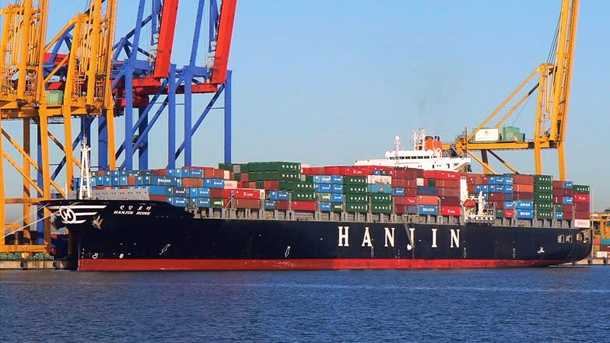 A Hanjin Shipping cargo ship is stranded in a Singapore port.

The choice of sending Hanjin Shipping into court receivership was a surprise. I half believed Financial Services Commission (FSC) Chairman Yim Jong-yong when he talked about principles in determining the fate of the troubled shipping company. In an off-the-record comment a month ago, Yim said that Hanjin Group should pony up the 1 trillion won ($915 million) the shipper needs to keep running. His warning was real, but at the time I thought it was a bluff to put pressure on Hanjin Group Chairman Cho Yang-ho.

I was wrong. The FSC was true to Yim’s words. Creditors let go the lifeline and the shipper went under. It was the first time the financial regulator followed though on such a warning since the 1997 financial crisis. The repercussions are huge. Cargo shipments have been disrupted, undermining our export-reliant economy. The government formed a joint action team but is barely able to control the crisis.

The FSC didn’t really think things through. It simply had creditors pronounce the shipper dead. A country that relies on exports and the sea for 70 percent of its shipments dumped the affair in the laps of banks, which must do their business based on calculations. The FSC claims it followed the textbook on how to deal with companies. Is that the best excuse it can come up with considering the disastrous aftermath?

Authorities should have done what they did with other restructuring decisions — hold discreet sessions in the West Wing of the presidential office. The deputy prime minister of the economy, senior presidential secretary for the economy, oceans and fisheries minister, the FSC chief, and industry minister should have sat down for serious discussions on Hanjin Shipping. Major economic and industrial decisions have come out of such West Wing meetings.

What did the presidential office and FSC say when the opposition criticized the November meeting to decide on a 4 trillion won rescue package for Daewoo Shipbuilding & Maritime Engineering (DSME)? They claimed there were extraordinary issues to be discussed that were beyond explanation and required informal debate among cabinet members. They argued such coordinated decisions and reasoning could better persuade the president.

But they did not bother to take Hanjin Shipping to the West Wing. There may have been two reasons. First of all, there could have been a pre-arranged scenario from the beginning on what to do with the shipper. Authorities may have had in mind merging Hanjin Shipping with Hyundai Merchant Marine. The FSC chief could not have decided the fate of the country’s biggest and the world’s seventh largest cargo carrier alone. There must have been an order from the highest authority, which was not happy with Hanjin Group.

Then there is also the possibility that nobody was willing to take responsibility. Since neither the presidential office nor deputy prime minister paid attention to the affair, it was left to the FSC chief. To tell the truth, the first case is more plausible. Otherwise, the bizarre and unlawful situation of top policymakers browbeating the group founder to cough up his personal wealth to help out a company can hardly be explained.

Why has this happened? Authorities may have thought Hanjin Shipping was different from DSME. The livelihoods of more than 43,000 workers at the shipbuilder and its affiliated companies had to be considered in dealing with DSME. Politicians visited the shipyard in Geoje Island and vowed to defend their jobs. The shipbuilder sits on debt of 22 trillion won. Its de facto owner is the government.

On the other hand, Hanjin Shipping has a workforce of 4,300 and bank debt of about 1 trillion won. It is owned by one of the biggest conglomerates. Politicians did not bother to interfere. An employee of Hanjin Shipping opined that the company would not have been so easily abandoned if there was a strong union or a large pile of debt.

Hanjin Shipping should have realized the gravity of the situation after getting a cool response from the presidential office and its parent group. Former President Kim Dae-jung declined to meet Daewoo Group Chairman Kim Woo-choong before dismantling the group 17 years ago. It should not have worn a brave face when the FSC threatened that it could be heading into court receivership if it didn’t come up with a better turnaround plan.

The legislature this week starts hearings on DSME. Opposition lawmakers will ask why authorities had not applied “principles” on DSME. What will the policymakers say?