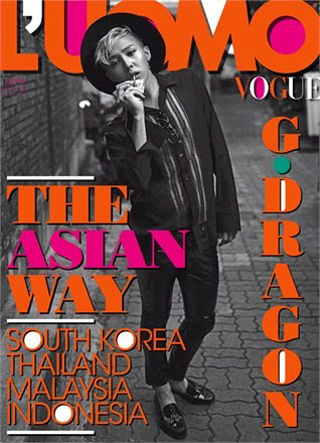 Big Bang leader G-Dragon appeared on the cover of fashion magazine Vogue last month. The rapper-singer was wearing a black Chanel jacket, a riding helmet and layers of pearl necklaces. Among the beautifully dressed female models, G-Dragon was strikingly beautiful. He is a notable star fashioning genderless style. Chanel does not make menswear, but G-Dragon is a known avid fan of the brand. He had once attended a Chanel fashion show, wearing a pink tweed jacket and a pearl necklace.

Genderless means androgynous appeal, deviating from the fixed gender type of men and women and not being categorized by one’s sexual identity. It is also called gender fluidity, flexibly identifying as male or female. It is different from the unisex style popular in the 1980s. Unisex fashion refers to men and women wearing the same outfits, such as hoodies and jeans, or women wearing items traditionally classified as menswear.

Lately, genderless is a buzzword in fashion and culture. Gucci’s fashion show featured several outfits that are hard to be classified as menswear or womenswear. Male models fashioned womenswear and wore menswear that seemed more like womenswear, and vice versa. A male model wore a blouse with big pink ribbons while a female model walked the runway in an oversize aviator jacket. Next year, Gucci will combine the women’s and men’s fashion show after having separate shows for decades.

Louis Vuitton has named Jaden Smith, son of Hollywood actor Will Smith, as the face of its women’s collection. The campaign featured Jaden Smith wearing a skirt alongside female models. The teenager was bare-chested and also wore a flower in his hair. He has been spotted wearing a dress to school.

The fashion industry sets trends before others. It sensitively observes and detects changes in the society. So the genderless fashion reflects the popular desire to be free from gender distinction and not to be forced into a binary role as a man or a woman. Clothing is an important tool socially distinguishing men and women.

The desire to be genderless is spreading beyond fashion. In some English-speaking countries, Mx is used as an honorific that does not indicate gender instead of Mr. or Ms. Some argue that gender-neutral pronoun “Xe” should be used instead of “he” or “she.” There are many attempts to bring down the boundary between men and women.

In the period of mass production, fixed gender roles had been convenient. However, it is no longer appropriate today, when we need creativity and added values. Just like genderless fashion, tearing down gender stereotypes will be a start to resolving various social problems, big and small.

*The author is a deputy lifestyle editor of the JoongAng Ilbo.