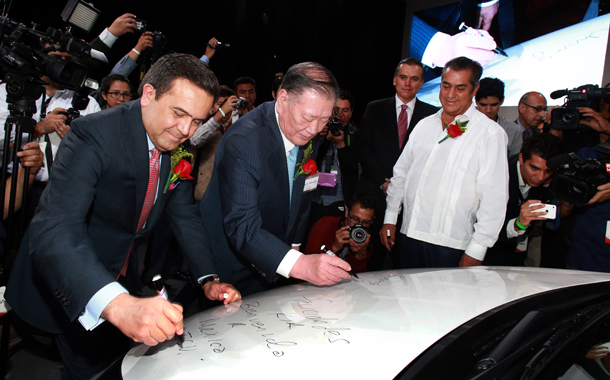 Hyundai Motor Group Chairman Chung Mong-koo is following other global automotive companies and starting production in Mexico to improve sales in the Americas.

Kia Motors, the country’s second-largest automaker and key affiliate of Hyundai Motor Group, on Wednesday opened a plant that can manufacture 400,000 vehicles annually in Pesqueria, Mexico. The plant, the sixth overseas factory for Kia Motors, is expected to increase the company’s annual global capacity to 3.6 million vehicles per year. The Mexico plant’s annual production is Kia’s second-largest after its plant in Yancheng, China, whose annual production amounts to 890,000 units.

The last plant that Kia opened was in the U.S. state of Georgia in 2010. Including plants that make Hyundai-branded vehicles, the Korean automotive group now has a total of 17 overseas plants across the globe.

“The new plant here in Mexico represents the next step in Kia Motors’ ambition to become one of the world’s leading automakers,” said Hyundai Motor Group Chairman Chung at the inauguration ceremony of the factory.

“With the new productivity, we are going to target not only the Mexico market, but also export to all over the world,” he added.

Ildefonso Guajardo Villarreal, Mexico’s Secretary of Economy, and Jaime Rodriguez Calderon, governor of the state of Nuevo Leon, were among 500 people who attended the ceremony.

Kia Motors and its suppliers invested $3 billion in its first plant in Mexico, which will be equipped with high-tech features, including 420 robots.

Since May the plant has been manufacturing the company’s compact sedan K3, known as the Forte in overseas markets. It is expected to produce 100,000 units by the end of the year. Next year, the fourth generation compact vehicle Pride, also known as the Rio, will be made there.

Some 80 percent of the vehicles produced at the Mexican plant will be exported, particularly to the U.S.

Mexico has become a hub for major global automakers including GM, Toyota, Nissan and most recently Ford, whose plant is expected to be completed in 2018. BMW broke ground on a plant in March and is investing $1 billion with a target of operating the plant in 2019.

Mexico is attractive to automakers because it is adjacent to the U.S., the second-largest automotive market after China, with 17.4 million new cars purchased last year. Mexico is a member of the North American Free Trade Agreement (NAFTA) and has bilateral free trade agreements with 49 countries.

Cheap labor is another attraction. According to the Mexican Automotive Industry Association, Mexican laborers’ daily wages average $40, which is 20 to 30 percent of wages in the United States. It is even cheaper than the wages of Chinese laborers.

The Mexican automotive market has been enjoying an average 10 percent annual growth since 2010 and became the second-largest car market in Latin America last year after 1.3 million new vehicles were sold. The largest market in that region is Brazil.

“We aim to expand our market share to 5 percent of Mexico’s auto market by 2020,” said the company spokesperson.