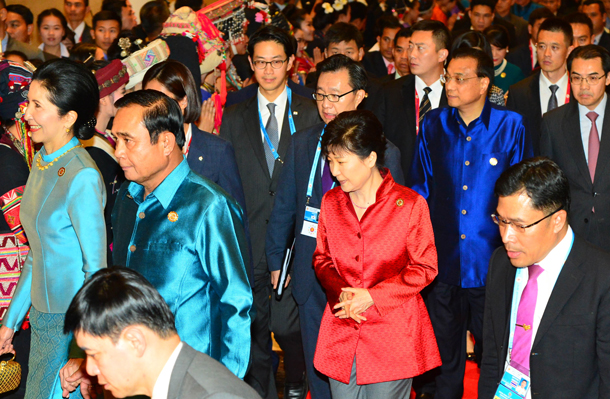 President Park Geun-hye continued Thursday her diplomatic efforts to hold North Korea’s feet to the fire for its continued nuclear and missile development while at a multilateral conference of East Asian leaders.

Park is currently visiting Laos to attend a series of meetings for the Association of Southeast Asian Nations Summit (Asean) and met with the leaders of the region to address escalating concerns regarding Pyongyang. In addition to its fourth nuclear test in January, the North has fired missiles throughout the year. Its latest provocation came earlier this month as it fired three long-range missiles while Park was attending the G-20 Summit.

Wrapping up its two day event, the association of 10 Southeast Asian countries addressed the developments on the Korean Peninsula in the Chairman’s Statement.

“We shared serious concern over the recent developments in the Korean Peninsula,” it said, “including the nuclear tests on 6 January 2016, rocket launch on 7 February 2016, subsequent ballistic missile launches and submarine ballistic missile on 23 August 2016 by the Democratic People’s Republic of Korea [DPRK], which are in violation of the United Nations Security Council [UNSC] resolutions.”

It continued, “We reaffirmed the importance of peace and security in this region and reiterated Asean’s support for the denuclearization of the Korean Peninsula in a peaceful manner. We also urged the DPRK to comply with all relevant UNSC resolutions, including the UNSC Resolution 2270 and acknowledged the importance to exercise self-restraint and called on all parties to exert collective efforts to maintain peace and security in the said region and create an environment conducive to the early resumption of the six-party talks.”

The North Korea issue was also discussed during Park’s meeting with Japanese Prime Minister Shinzo Abe on Wednesday. They agreed to respond together to the North’s missile provocations. They also agreed to work together with the United States in dealing with the North.

Abe particularly reacted to the North’s latest ballistic missile firings on Monday, calling them “indescribable violence.” The three missiles launched by the North on Monday flew about 1,000 kilometers (621 miles) and fell within Japan’s exclusive economic zone. After the Asean Summit, Park attended the East Asia Summit (EAS) in the Laotian capital of Vientiane. The annual forum is attended by the 10 Asean members, Korea, Japan, Australia, China, India, New Zealand, Russia and the United States as well as UN Secretary General Ban Ki-moon. This year’s meeting is the sixth of it kind.

After the forum, the EAS also adopted a nonproliferation statement and condemned the North’s provocations.

“Park exchanged opinions on regional and international issues with the leaders of the EAS members,” said the Blue House. Park urged the international community to issue a stern message that it will not accept a nuclear-armed North Korea by implementing the sanctions, and stressed the importance of cooperation to pressure the North to make the right choice.

Before attending the EAS summit, Park had a bilateral summit with Indian Prime Minister Narendra Modi and discussed cooperation between the two countries, particularly in economic projects. It was Park’s fourth summit with Modi during her term.

After wrapping up the multilateral forum, Park began her official two-day visit to Laos.