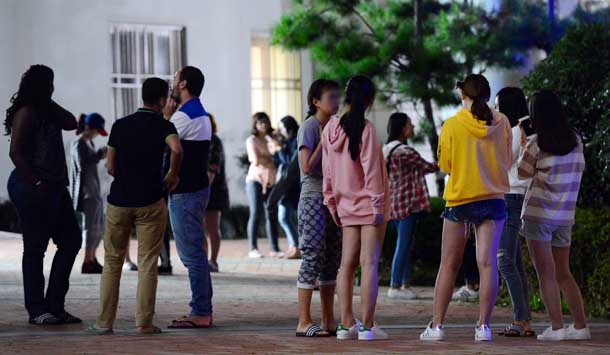 Foreign students outside their dormitory at Pukyong National University in Busan on Monday evening after two earthquakes struck Gyeongju, a nearby city in North Gyeongsang. [NEWSIS]

Two strong earthquakes of magnitude 5.1 and 5.8 struck Gyeongju, a city in North Gyeongsang about 370 kilometers (230 miles) southeast of Seoul, on Monday evening, setting off tremors across the nation.

There were no immediate reports of casualties or serious damage. According to the Korea Meteorological Administration, the 5.8-magnitude quake was the largest since 1978, when the government started monitoring seismic activity.

The first, a 5.1-magnitude earthquake, struck at 7:44 p.m. and was mostly felt in the surrounding cities of Daegu, Ulsan, Busan and Daejeon. The second earthquake at 8:32 p.m. traveled even farther to affect the capital of Seoul.

Lee Sang-wook, deputy mayor of Gyeongju, said he felt his body sway for about 15 seconds and that many people evacuated their homes.

The mobile messenger app KakaoTalk, used by over 90 percent of smartphone users in the country, went out of service for a couple of hours after the first earthquake.

The operator, Kakao, said in a statement issued to users that the earthquake had "interruped connection" to some of its servers, causing a delay in messaging.

The Korea Hydro & Nuclear Power Corporation, operator of the nation’s nuclear plants, said none of the reactors were affected.

Several high-speed KTX trains were grounded on the railway linking Ulsan and Gyeongju or forced to slow down for a while, but quickly resumed their full speed shortly afterward.