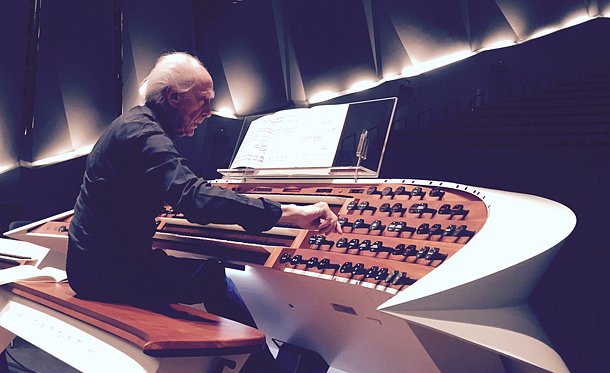 Lotte Concert Hall
Sept. 20: Jean Guillou, who has visited Korea several times to meet with local pipe organ players and instruct students, is making another trip here next week for a recital. He is said to have composed a special piece based on the melody of a Korean folk song.

The venue for the recital is also notable for being the first concert hall in the nation equipped with a pipe organ.

The audience will be able to feel Guillou’s creativity, humor and warmth through his music. The program consists of four pieces, including the self-composed “SAGA No. 4 and No. 6,” Franck’s “Piece Heroique,” Listz’s “Fantasy & Fugue on B-A-C-H” and Mussorgsky’s “Pictures at an Exhibition.”

Sept. 21: The special concert series Yonsei Classic has been held every month on the third Wednesday since March at Kumho Art Hall Yonsei and has invited a variety of classical musicians. In September, the Yonsei Classic presents Austrian violinist Rainer Kuchl.

Kuchl led the Vienna Philharmonic and Vienna State Opera for 45 years as concertmaster from 1971, taking up the post when he was just 20. He has performed with renowned maestros including Karl Bohm, Leonard Bernstein and Carlos Kleiber. In 1973, he founded the Kuchl Quartet, presently known as the Vienna Musikverein Quartet.

In August, Kuchl retired from the Vienna Philharmonic, and this will be his first recital in Korea since retirement. Kuchl will perform his favorite pieces by composers from Mozart to Tchaikovsky.

Sept. 23-25: Five years after its last concert, Antenna, the talent agency of singer-songwriter Yoo Hee-yeol, is back with its third big event encompassing various artists from the agency.

Jung Jae-hyung, Lucid Fall, the Peppertones and five other singers will be participating. Yoo himself will perform on stage under the name Toy.

The concert was originally scheduled just for the weekend, but due to popular demand, tickets sold out quickly. As a result, the agency decided to add one more day, Friday.

Under the agency motto “Good People, Good Music,” special collaboration pieces among the artists will be performed. 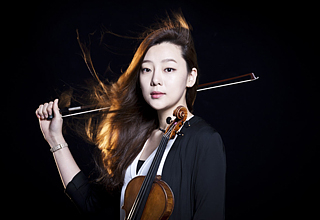 Sept. 25: It is rare to find a talented female double bassist in Korea like Kwak Se-hyun. After graduating from Seoul National University, she went straight to the University of Texas at Austin and recently returned to her motherland with a Ph.D. in music.

To celebrate her comeback, Kwak is holding a recital at Kumho Art Hall in central Seoul. The program includes Bach’s “Cello Suite No. 1 in G Major,” Hindemith’s “Sonata for Double bass and Piano” and Proto’s “A Carmen Fantasy for Double Bass and Piano.” Kwak will be accompanied by pianist Park Cho-rong. 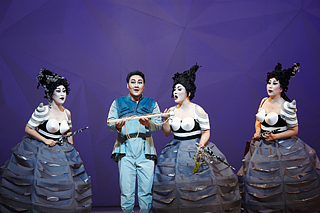 Sept. 23-27: Mozart’s seminal opera is back with its cheerful and emotional air that transcends generations. The simple and friendly melodies, forming a harmony with deep religious music, will once again let the audience savor the colorful beauty of opera.

Known to be Mozart’s last opera, “The Magic Flute” is acclaimed by later composers as perfect in musical composition, a magnum opus that encapsulates the composer’s genius and musicality.

This year’s show is drawing much attention with its distinguished vocalists. World-renowned tenor Kim Woo-kyung, who has been well-received at the world’s top opera theaters including the Metropolitan Opera in New York, the Royal Opera House in London and La Scala in Milan, will be taking on the main role of Tamino.

There are no shows on Saturday and Monday.

To Oct. 3: People in Korea often go see horror movies to escape the hot weather, but one musical is trying to lure people into the theater as well.

Alessandra Ferri, former principal dancer of the American Ballet Theatre, and Herman Cornejo, current principal dancer, will be coming to Korea to take the stage on Oct. 23 and 26.

The ballet’s first act displays the masquerade, the threshold of the tragedy; the second features the balcony scene pas de deux; and act three opens in Juliet’s bedroom, heading for the famously tragic ending.

To Nov. 11: The Korean production of the popular Broadway musical “Kinky Boots” is being staged for the second time with some new cast members including veteran musical actor Chung Sung-hwa as Lola, the drag queen.

This award-winning musical, based on the 2005 film of the same name and featuring music composed by pop icon Cyndi Lauper, is co-produced by Korean entertainment giant CJ E&M. The local producer requested audiences “come to the show adorned in something red so that everyone can be a part of the show and have a little fun.”

Some new cast members include Kim Ho-young and Lee Ji-hoon, who will be alternating the role of Charlie, and actress Kim Ji-woo, who’s been cast to play Lauren, a factory worker.

In a letter Jang wrote while he could not sing, he was full of tears, and now finally, he feels like a flower after being able to sing again.

Dongkuk University Station, line No. 3, exit 2 for the shuttle bus, or bus No. 02 or 420 to the National Theater of Korea bus stop.