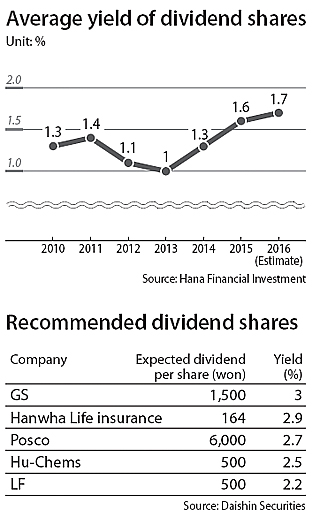 Kim Soo-young likes to make small investments. Recently he has been making profits from the dividend on shares he bought since last year. He invested in 12 companies, most of them large caps and preferred stock that offer a fixed dividend paid earlier than from common stock.

The average dividend yield, which is the ratio of the dividend to the value of the stock at the time of purchase, was 3.2 percent.

“The dividend yield is higher than the interest rate on bank deposits, which is really exciting, and recently the performances of such dividend shares on the Korean stock market has been doing well,” said Kim.

Many Korean companies’ fiscal years end in December and investors are snapping up shares to cash in on the dividends. That has helped raise the value of these shares

Analysts say September and October are the best time to buy so-called dividend shares before their value goes up.

“In you look at the investment trend in the last five years, many investors tend to buy dividend shares in September and October,” said Kim Ji-hye, an analyst at Kyobo Securities.

With performances of many listed companies expected to improve in the third quarter, there are already signs that investors are buying more dividend shares than in previous years.

The net profit of listed companies on the benchmark Kospi in the first quarter was 17.6 percent higher than a year earlier. In the second quarter it was 25.7 percent higher.

The market is expecting a number of companies to announce earnings surprises in the second half.

“Companies’ free cash flow has been improving, which indicates the possibility of an increase in dividends,” said Cho Seung-bin, a Daishin Securities analyst.

Investors use free cash flow (FCF) to analyze the state of a company. It is the amount of cash a company has after paying taxes and other costs as well as investments. The remaining cash is used in paying dividends to its investors, although it can be used for other purposes too, such as acquisitions or R&D.

Daishin Securities is recommending GS, Hanwha Life Insurance, Posco, Hu-Chems and LF. All of those companies’ dividends are expected to be more than 2 percent as their net profits are expected to improve in the second half.

There are also dividend funds.

According to NH Investment and Securities, there are currently 69 dividend funds with Hanwha’s ARIRANG High-Yield Dividend Share ETF having the highest yield of 21 percent. Baring High-Dividend Plus S ranks second-highest with a 14.9 percent yield; Kiwoom KOSEF High Dividend ETF has a 14.3 percent yield and Mirae Asset Dividend Premium Fund has 13.8 percent

“When you look at the yields of the funds by their investment style, growth shares posted a 6.3 percent loss whereas value shares enjoyed a yield of 13.4 percent and balanced funds 6.7 percent,” said Moon Soo-hyun, an NH Investment & Securities analyst.