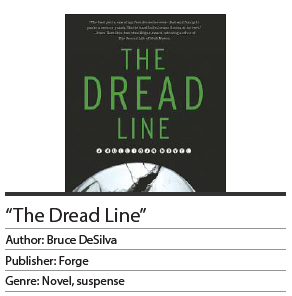 Liam Mulligan is juggling several intense cases in “The Dread Line” by Edgar Award-winning author Bruce DeSilva. A baffling heist of valuables from a safety deposit box has left few witnesses, and no one was helpful to police.

The owner of the stolen jewelry wants to remain anonymous, making it extremely difficult for Mulligan to track down clues, let alone a motive.

When Mulligan decides to buy a dog from a rescue facility, he learns that someone is doing terrible things to animals, and he vows to uncover the culprit. The main case he gets from his partner at McCracken’s detective agency involves doing a background investigation for the New England Patriots.

The NFL draft looms close, and the Patriots have a player in mind to select, but they hope Mulligan can look at Connor Bowditch and make sure there are no skeletons in his closet.

Mulligan learns that Bowditch has gambling debts, and soon realizes that he’s being followed. McCracken receives a visit from two thugs and is told to stay away from investigating Bowditch. They break his wrist to ensure his silence. Mulligan refuses to stop, and when he asks Bowditch for answers, the star football player claims to have no idea who would be threatening them.

The cases keep Mulligan’s hands full while he pines for Yolanda, the love of his life, whose job keeps her away from him. Each case is both compelling and mysterious, so the action never lets up. Mulligan has a snappy answer for any situation, and when it comes to reliability and always having someone’s back, he’s the guy to call.