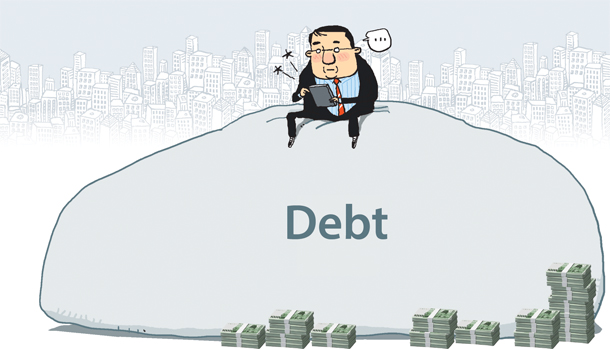 Is debt bad? Individuals as well as the state inevitably have to fall back on debt financing. It costs the nation to fight a war or overcome natural disasters and financial crises. It would be better to simply collect that money straight from the people, but that’s easier said than done. People don’t wish to pay more tax when the economy is slow and their life is difficult. Governments around the world have been using debt to sustain their economies following the 2008 financial meltdown.

The government struggled to maintain its fiscal integrity while trying to revive the economy in the budget for 2017, which is currently under review by the National Assembly. But the goal of stimulating growth while defending fiscal integrity is not easy. In fact, the government can end up failing in both. Proposed government expenditures for next year are the largest-ever: 400.7 trillion won ($356 billion). Despite the colossal figure, it is only a 3.7 percentage increase from this year’s budget, which is below the average 5.0 percent growth over the last five years. When including the supplementary budget for the second half, next year’s spending would be just 0.5 percent higher than this year.

Yet the government estimated income growth of 6.0 percent next year. It projected that tax income, which accounts for the largest share of the government’s revenue, would reach 241.8 trillion won, up 8.4 percent from this year. Its spending plan was conservative against its revenue estimate.

The finance ministry forecast real growth of 4.1 percent for next year’s economy — 3.0 percent rise in gross domestic growth plus 1.1 percent gain in inflation. The government was in fact proposing to spend less than the projected economic expansion.

The government has become cautious in spending in order to cap debt levels. According to the budget outline, the deficit would be 1.7 percent of GDP next year, below this year’s 2.4 percent. Liabilities of the central government would reach 682.7 trillion won, 40.4 percent of the GDP. The government estimates the debt ratio against the GDP would remain under 40.1 percent until 2020. The average debt ratio of the members of the Organization for Economic Cooperation and Development (OECD) hovers at 84 percent. That is why Korea’s public finance level is much envied in the world.

Society is aging at a staggering pace. Korea’s working population will peak at 72.9 percent this year and slip to 56.5 percent by 2040. From then, just half of the Korean population will be working. Social welfare costs to sustain the other half will be astronomical. By 2040, welfare spending as a share of GDP will reach 22.6 percent, around the OECD average.

The economy naturally loses steam as the population gets older. The local economy grew 3.0 percent on average from 2011 to 2014. The Bank of Korea estimates potential growth will stop at 3.0 to 3.2 percent between 2015 and 2018. Private institutions project growth in the mid-2-pecent range. No one can deny it: the Korean economy is already in a slow gear.

The government has two options to stimulate the economy — loose monetary policy through increased money supply and interest rate cuts, or expansionary fiscal policy. Seoul is in a bind on both fronts. The central bank can hardly push the base interest rate below the current record-low of 1.25 percent because its U.S. counterpart is poised to lift interest rates.

On the fiscal front, the government is fearful of issuing more debt. The growth pace in debt is already too fast. The debt ratio that was 11.9 percent in 1997 has gone over 40 percent in just two decades. In the four years under President Park Geun-hye, debt has expanded by nearly 200 trillion won.

Fiscal integrity and growth are hardly compatible. It is impossible to achieve both. It is why it is hard to explain next year’s budget plan. The government claims it to be expansionary, but the market considers it as tightening.

The only breakthrough lies in deregulation and structural reform. The fundamentals need to be changed. There are only 17 months left in Park’s tenure. But the political attention is already focussed on next year’s presidential race. Can we afford to give up on economic reform? Park has promised structural reform. She must fulfill that vow.


*The author is the head of the international business news of the JoongAng Ilbo.