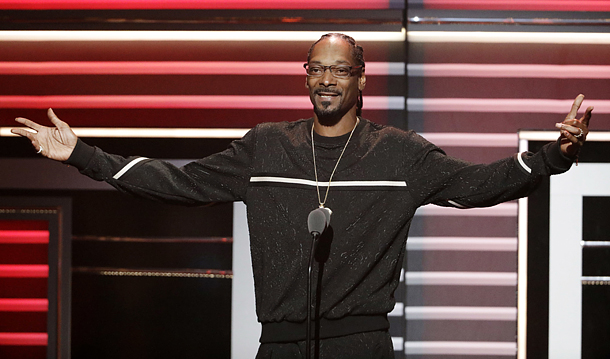 Snoop Dogg speaks while being honored with the “I Am Hip Hop” award at the BET Hip-Hop Awards in Atlanta, on Saturday. [AP/NEWSIS]

ATLANTA - Snoop Dogg said he initially felt misunderstood at the beginning of a rap career that ended up legendary while accepting his “I Am Hip Hop” honor during a politically-charged BET Hip-Hop Awards show near Atlanta.

Rapper Kendrick Lamar surprised attendees Saturday evening by introducing and handing Snoop the award during the 11th annual awards, which was taped. Lamar, in front of a packed crowd at the Cobb Energy Performing Centre, said the ultra-smooth West Coast rapper “paved a way into many hearts” with his authentic rap flow and infectious persona.

Hip-hop royalty from Dr. Dre to Pharrell Williams paid homage to Snoop, a legend in his own right.

“He mastered the game through tests and challenges that earned him the respect of a college professor, except his game came from the streets,” Lamar said. “He put (me) on game, so I would avoid the same pitfalls. ... Snoop Dogg was the God, and continues to be so.”

During his acceptance speech, Snoop encouraged up-and-coming rappers to continue to “push the envelope” in being creative and original.

“To all the young rappers in the game, a lot of people don’t understand you. Y’all are misunderstood,” he said. “I was misunderstood at the beginning. So you got to keep pushing, be original and diverse. Hip-hop was created many years ago and it’s taken people so many places. You have to be who you are.”

When Snoop Dogg wasn’t being honored, the show focused its attention toward police brutality of African-Americans.

Wearing all black, T.I. performed his politically-charged song “We Will Not” as a stage full of people sporting dark attire held up “Black Lives Matter” signs. The rapper said he was motivated to write the song after hearing about a series of deaths of black people including Sandra Bland, who died while in police lockup after a traffic stop, and Philando Castile who was fatally shot by police during a traffic stop. Castile was licensed to carry and had a firearm in his car.

Rapper Big K.R.I.T. and Lecrae, a Christian rapper, expressed their thoughts on the matter through their own poems and radio host Sway Calloway stood alongside Khaled and said, “We’re at war.” Actor Shameik Moore encouraged people to cast their vote.

T.I. said at the end of his performance that blacks should unite adding, “They can’t kill us all.”

“He means so much to hip-hop,” rapper Young Jeezy said. “There are so many who look up to him. He paved a way for so many, and that’s why everybody knows him as Uncle Snoop.”

Rapper Gucci Mane, recently released from prison, hit the stage first. He performed four songs, kicking his set off with “First Day Out” and “First Day Out Tha Feds”. The rapper made his return after being released in late May from a Federal Correctional Institution in Terre Haute, Indiana.

He served a three-year sentence after pleading guilty to aggravated assault for attacking a fan at an Atlanta nightclub. That sentence ran concurrently with a 39-month federal sentence he was given in 2014 for possession of a firearm by a convicted felon.

There were several recorded freestyle sessions, known as The Cypher, featuring several artists including Lil Wayne and comedian Kevin Hart, who rapped shirtless wearing dark sunglasses. During Hart’s rap, some laughed while other applauded his efforts.

Lamar took home Lyricist of the Year, Fat Joe and Remy Ma won Track of the Year award for their song “All the Way Up.” The Hustler of the Year honor went to DJ Khaled, and Best New Hip-Hop Artist was earned by Chance the Rapper, who was not in attendance.

Rapper Desiigner closed out the show with “Timmy Turner.” The show will air on BET on Oct. 4.