Stiller and Wek speak for refugees before UN

Stiller and Wek speak for refugees before UN 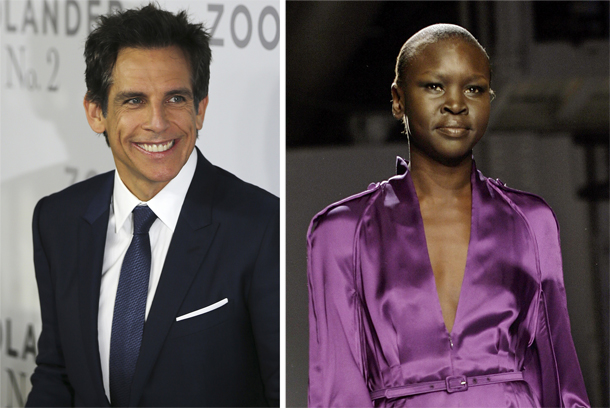 Stiller and Wek visited the UN General Assembly on Friday to present Secretary General Ban Ki-moon with a petition bearing over 1.3 million signatures, calling on governments to act with solidarity and shared responsibility for the world’s 21.3 million refugees.

“I’m honored to be here today to share the petition that people all over the world have signed showing support for refugees,” Stiller said.

“Every day war forces thousands of families to flee their homes. Families like yours, families like mine to escape violence and leave everything behind, everything except for hopes and dreams for a safer future. We believe all refugees deserve a right to protection and live in safety,” Stiller added, reading from the petition.

Wek, a goodwill ambassador for the UN Refugee Agency who herself was forced at age nine to flee her home in what is now South Sudan, said she wouldn’t be where she is today if not for the agency’s work.

“I know what it’s like to lose everything, to desperately search for safety and shelter, to be separated from my family members. I also know the joy of being welcomed to a new community, getting back into education, being able to work and fulfill my potential and give back. This is why we’re here today to call for solutions for all refugees,” she said.

Ban, the UN chief, signed the petition and reminded those in attendance that he was forced to flee his home when he was six because of the Korean War.

The ceremony comes ahead of Monday’s high-level summit on refugees and migrants, which aims to ease the current crisis by encouraging solidarity with refugees and shared responsibility among world governments.

“There is a crisis of solidarity, at the same time there is also a surge in solidarity. You have both, you’ve seen it in Europe last year when people were arriving at the railway stations in Central Europe, there was rejection but there were also a lot of people who were going out to give and I think much as it is important to counter the rejectionists, it is equally important to support those who want to help, to give them a voice,” said Grandi.

Wek agreed refugees must have a voice.

“I think it’s very important to share these refugee stories and the crisis of the moment needs a lot of support, financial support, but I think the stories need to be told correctly,” Wek said following the ceremony. “Refugees are not a burden, they’re just like you and I.”