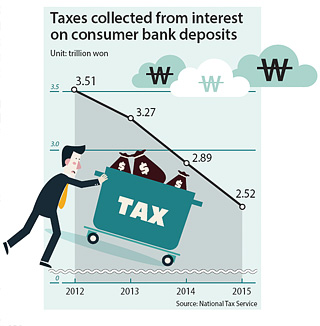 As the Korean central bank has steadily lowered the key interest rate in hopes of boosting the economy, the tax that the government has collected from consumer profit from bank deposits has also shrunk.

Taxes collected from interest on consumer bank deposits in 2015 shrank 13 percent compared to the previous year to 2.52 trillion won ($2.25 billion), the National Tax Service said Monday. The tax has fallen since 2012 when the Bank of Korea first cut rates.

The central bank in July 2012 reduced the key rate 0.25 percentage points, bringing it down from 3.25 percent in June. Since then the central bank has shaved the rate eight times, the last being June of this year when the rate was cut from 1.5 percent to a new all-time low of 1.25 percent.

The moves have shrunk the profit that consumers have made from depositing their money in the bank.

In fact, the profit that households and nonprofit organizations earned from interest shrank 19.5 percent or 7.79 trillion won compared to the previous year to 32.2 trillion won last year.

As a result, tax collected from consumer deposits shrank 28.3 percent from 3.51 trillion won in 2012.

The current trend is expected to continue next year.

The Ministry of Strategy and Finance report estimates collected tax will shrink 17.3 percent this year to 2.08 trillion won and next year further drop to 2.02 trillion won.

But will there be additional rate cuts by the central bank?

Currently, the response is mixed. Although the BOK’s monetary policy committee unanimously voted earlier this month to freeze the interest rate at 1.25 percent, foreign investment banks including Standard Chartered, HSBC, BNP Paribas, Goldman Sachs and Barclays are betting on another rate cut in the fourth quarter amid weak inflation and the restructuring of the shipping and shipbuilding industry.

Korean brokerages on the other hand are betting the BOK will hold the current rate steady until the end of the year, citing the growing chance the U.S. Federal Reserve will raise its key interest rates.

“With the U.S. expected to raise its key interest rate within the next two months, it will be difficult for the BOK to lower the interest rate,” said Lee Mi-seon, an analyst with Hana Financial Investment. “Additionally the central bank has been building up its case in favorably freezing the interest rates by voicing concerns over the growing household debt jointly with the government and releasing reports on the necessity of using fiscal policies in tackling the slowing economy rather than relying on monetary policies.”

BOK governor Lee Ju-yeol raised concerns over Korea’s low interest rate in the face of a possible hike of U.S. interest rates that would lead to investment withdrawals in emerging markets, including Korea.