Auction in deal with GM to sell cars online

Auction in deal with GM to sell cars online 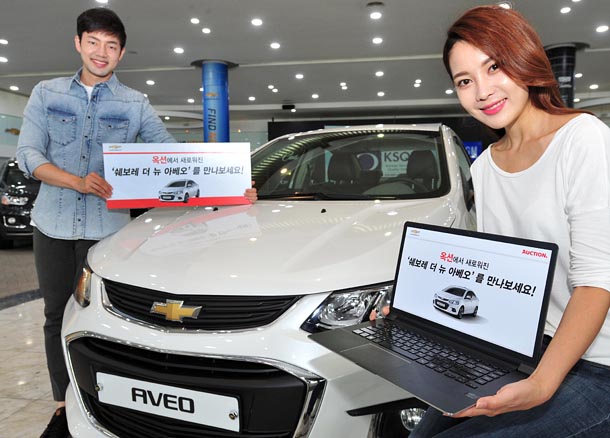 Ten units of GM Korea’s latest compact Aveo will be sold on the online platform Auction starting Sept. 26. It is the first time in Korea that an e-commerce platform has signed a deal directly with a car company to sell vehicles online. [AUCTION]

The fast-talking car salesman may soon go the way of the car cassette player.

Auction, the country’s top auction website operated by Ebay Korea, announced Monday that it has formed a partnership with GM Korea to sell 10 units of its latest Chevrolet compact vehicle, the Aveo, in a bid to attract more buyers in their 30s and 40s, who are increasingly shopping online.

This is the first time an online shopping platform has signed a deal directly with a car company instead of a dealership.

To make a purchase, a customer will first have to put down 2 million won on Auction, which they can get back later if they don’t go through with the purchase.

This is followed by a matching service with a nearby dealership where the customer will consult with a car salesman in person on diverse options to install in their cars.

The dealer will then provide the customer with an individual link containing the final price, which will then be transacted through Auction.

“This deal is meaningful because it is the first time in Korea that an e-commerce platform has directly made an agreement with a car company to sell their vehicles,” an Auction spokesperson said.

GM Korea said it decided to sell the latest Aveo through an online platform because they thought it would be more effective in reaching their new target demographic - women in their 30s and 40s - through e-commerce.

The American automaker is not the first to sell cars online in Korea.

Renault Samsung, the Korean unit of French carmaker Renault, began selling its latest premium sports utility vehicle, the QM6, through its own website earlier this month. The car company was the first to allow potential buyers to look at the car in detail through an online showroom and then make an estimate by clicking through an options checklist.

The final transaction could be made through Kakao Pay, a mobile payment service from Korean internet company Kakao.

Ticket Monster, another Korean e-commerce platform, sold 20 units of Jaguar’s midsize XE Portfolio sedan in August with a local dealership that it would not disclose.

Jaguar Land Rover Korea said it had not made any deals with Ticket Monster because the dealership was not associated with the carmaker.

However, the online platform’s attempt was enough to signal to other companies that traditional car-selling methods are not enough.

On Auction’s latest deal with GM Korea, a spokesperson for the website said, “We are going to consider expanding the car-selling section on Auction if this first try is well received by consumers.”