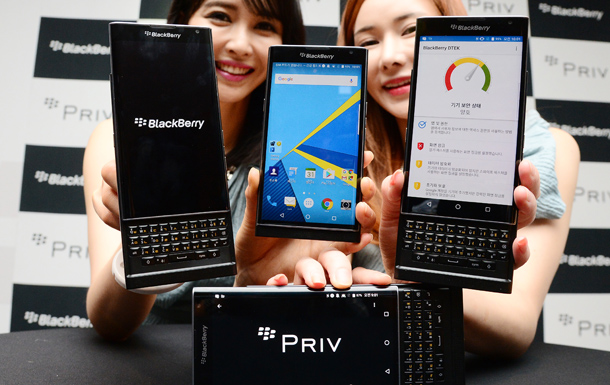 BlackBerry has returned to Korea after a three-year absence with its first Android smartphone.

The Priv, the company’s first smartphone, was introduced in other key markets in November. The Canadian smartphone maker unveiled the new device after failing to reinvent itself in the face of stiff competition from Samsung Electronics and Apple.

BlackBerry silently withdrew from Korea in 2013, four years after entering. The Priv model is not even the latest from BlackBerry, given it already began shipping its second Android phone DTEK50 in the United States and Canada last month.

Damian Tay, senior director of Asia-Pacific product management at BlackBerry, told reporters at the unveiling event on Tuesday in central Seoul that the Priv’s launch in Korea was delayed as the product had to “go through various tests and certification process required for the Korean market.”

Priv is a rarity among smartphones, given it combines BlackBerry’s signature Qwerty physical keyboard and a touchscreen. The model may catch on with traditional BlackBerry fans who are nostalgic about their old phones. Before the Priv, BlackBerry phones were powered by its own operating system.

Tay also stressed the strong security features of the Priv - a series of security-focused apps built specifically for it and a built-in password manager. But the model misses a few now-common protection options such as a fingerprint reader or iris scanner.

The 5.4-inch dual-edge screened phone with an 18-megapixel rear-facing camera will be sold through SK Telecom, KT and a few online stores. Retail prices start at 598,000 won ($534.) Sales of the Priv began on Tuesday.