Using China as a shield

Using China as a shield 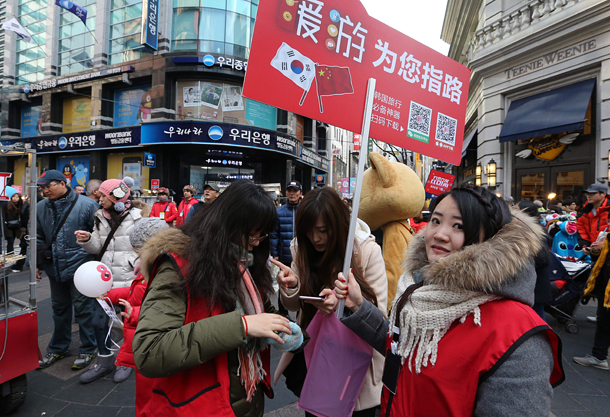 Let’s say one day a 15-kiloton grade nuclear bomb is detonated over the U.S. Forces base in Yongsan. The U.S. Department of Defense presumes this would cost lives of 650,000 people and destroy every building within a radius of 4.5 kilometers (2.8 miles). Most of the victims would be Koreans, but how about foreign casualties? As it is targeting the U.S. military base, one may think most of the foreign victims would be Americans, but in 2014, 11.4 million foreign tourists visited Seoul, staying an average of four days. So, on any given day, there are about 120,000 foreigners in Seoul, and the most popular tourist destinations — Myeong-dong, Dongdaemun Market, the palaces, Namdaemun Market, Namsan — are all within five kilometers of Yongsan.

What’s more, 35 percent of foreign visitors are Chinese, so if a nuclear bomb detonates over Yongsan, 20,000 to 30,000 Chinese tourists strolling the streets of Myeong-dong will be killed. American tourists will be about 10,000, or 6 percent of the total visitors. Even if you add the 10,000 U.S. forces stationed in Yongsan to that number, the Chinese casualties are still far greater.

When discussing the U.S. Forces presence in the Korean Peninsula, supporters always mention the “tripwire” function, the wire that triggers explosions in booby traps. Just like a tripwire, when the USFK is attacked, the United States gets involved automatically and therefore U.S. forces must not leave the Korean Peninsula, they argue.

Next year, the 2nd Infantry Division is to relocate to Pyeongtaek. The human shield that guaranteed the involvement of Uncle Sam in case of a North Korean attack on the capital will no longer be in place. In that case, China may oppose the North’s use of nuclear weapons more than the United States, purely out of concern for Chinese tourists.

But Chinese investment could also serve as a shield. In 2013, China’s direct investment in Korea was $480 million, less than one-seventh of U.S. investment. But last year, it increased to $1.97 billion. Now, it is over one-third of U.S. investment of $5.47 billion and is rapidly growing.

When I expressed concerns for Chinese investors buying apartments in Gangnam in my recent column, a friend rebuked me as being near-sighted. China’s human and material presence in Korea would be a great security asset for Korea, he said.

Not long ago, a politician was in hot water after suggesting that building a casino for Chinese tourists near the demarcation line would hinder North Korean provocation. Building a casino sounded quite absurd, but the fundamental idea should not be laughed off. Before the North Korean threat, Korea is helpless and we need to be flexible now more than ever.