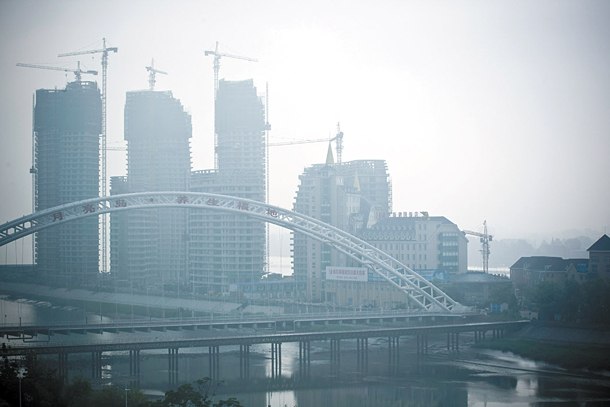 High-rises under construction on an island in the Yalu River across from Sinuiju, North Korea. [KWON HYUK-JAE]

For many years, China’s authorities took a Goldilocks approach to housing prices: They wanted a market that was neither too hot nor too cold, and took measures as needed to control prices. Although an explicit asset-price target was never announced, it was widely assumed that the government wanted home prices to grow in line with the rate of economic growth.

To accomplish this, technocrats in Beijing deployed a combination of monetary stimulus and regulatory measures. When prices overheated, they put the brakes on credit growth, required higher down payments for mortgages and placed administrative restrictions on who could buy in which cities. When prices started to drop, they tried loosening credit and boosting the number of units people could own.

But in the past few years, with economic growth sluggish, the planners became much more tolerant of rising prices, even as signs of a bubble emerged. Official data shows the price-to income-ratio hitting 9.2 at the end of 2015; housing prices have continued to rise significantly since. All this has led to some widespread distortions.

China’s homeowners have come to see near double-digit real-estate returns as a birthright, a bet on par with death and taxes. According to one study, more than 70 percent of Chinese household wealth is in housing. Investors believe there’s an implicit guarantee that the government won’t let home prices drop, even as many buildings sit empty.

In urban China, the average price per square foot of a home has risen to $171, compared to $132 in the U.S. In first-tier cities such as Beijing and Shenzhen, prices have increased by about 25 percent in the past year. A 100-city index compiled by SouFun Holdings Ltd. surged by a worrisome 14 percent in the last year. Developers are buying up land in some prime areas that would need to sell for $15,000 per square meter just to break even.

When the government has halfheartedly tried to apply the brakes, efforts to game the system have only intensified. Shanghai recently had to put down rumors that it was planning to tighten ownership restrictions for married couples after city offices were crammed with couples seeking a “divorce” so they could continue buying property. An entire industry has evolved to help people prove they have the required amount of financial assets needed to obtain a mortgage.

The People’s Bank of China surely doesn’t want people to think of housing as a one-way bet. Ma Jun, the chief economist of the PBOC’s research bureau, was recently quite explicit in warning of a bubble. But right now, no one believes that prices will be allowed to fall significantly.
The first step, as with any addiction, is for Chinese leaders to admit there’s a problem and formally move away from the implicit asset-price growth target.

Just as the government has embraced a so-called new normal of lower economic growth, it should recognize a new normal in housing prices that doesn’t force tightening or loosening measures every few months to hit an unsustainable growth target. Leaders have to accept that allowing asset prices to fall can sometimes be healthy, and attempting to prop them up can often be counterproductive. A burst bubble would be a disaster: Bailing out the real estate market would dwarf the few hundred billion dollars used to prop up the stock market in 2015.

In consistently allowing home prices to rise so dramatically, the PBOC is significantly increasing risks of just such a brutal correction. Though it may be difficult for investors to profit from slower growth in real-estate prices, that’s far preferable to the alternative. Asset-price targeting in China has run its course.