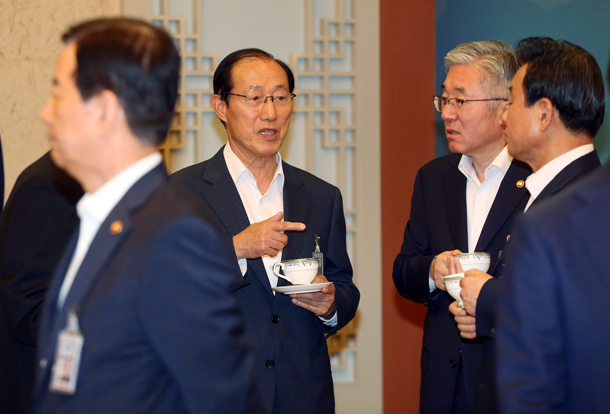 Park In-yong of the Ministry of Public Safety and Security is a hard-working bureaucrat. In fact, it is hard to find someone as diligent as Park among the public servants. In the joint media conference in April 2015, he said that he would come to the office every day, 365 days a year, until he stepped down. He has never taken a day off and is keeping his promise. Unless he was on a business trip, he stops by the situation room even whilst on holiday.

Even over a dinner, his conversation hardly deviates from work. When things get too serious, he makes a joke. But he is not particularly humorous. He likes to say, “I will do anything to make the country safer.”

He is sincere. While no one can know what he really feels at heart, it doesn’t seem that he has been working so hard because of ambition. “What more would I want at this age?” he says. Born in 1952, he is 64 years old.

Diligence defines his life. He was born during the Korean War and chose a military career. While in the Naval Academy, he was a cadet commander. He later served as the commander of the Third Fleet, Navy operation commander and vice chairman of the Joint Chiefs of Staff. He is accustomed to tension as an admiral. A military executive close to Park describes him as “a proud soldier to the bone.”

When he became the first minister of public safety and security, it was analyzed that the person who appointed him highly regarded his military leadership and ability to control situations. In fact, he faithfully led and maintained the new organization. Under his guidance, executives and employees worked just as hard.

The ministry is under harsh criticism over its response to the earthquake. Minister Park must be devastated. In the current system where the ministry receives the earthquake information from the Korea Meteorological Administration first and then sends text messages, some delay is inevitable. The National Computing and Information Service is responsible for the website crash. Nevertheless, Park cannot avoid responsibility for failing to predict and prevent such situations and display “strategic imagination.”

Golfers Park In-bee and Jeon In-ji are players who are not particularly known for long hours of practice. But they perform very well in actual games, especially major ones. Coach Park Won, who taught Jeon, said that if a player focuses on practicing shots, he or she would lack creativity. Nowadays, saying “I will work hard” and “I will do my best” won’t get you good marks in job interviews. I am sorry to say this to Minister Park, but working hard does not mean doing well.