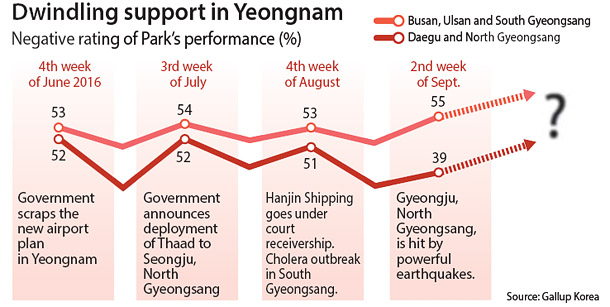 “There is nothing worth listening to in the president’s words,” Kim Jong-nam, a 53-year-old housewife, said on Wednesday. “She doesn’t say if the nuclear plants are safe and she doesn’t say what she will do when another disaster hits.”

Kim, a resident of a high-rise apartment in Haeundae, Busan, did not hesitate to express her fear of the earthquakes and the government’s inability to cope with them. “Sometimes,” she said, “I wonder if leaving this country is the only option.”

Kim is not alone in her censure of the president or her party. In the aftermath of a series of natural and political disasters this year, the ruling Saenuri Party and the president are rapidly losing support in its traditional strongholds in the southeastern Yeongnam region.

The regional rivalry between Honam and Yeongnam has long defined Korean politics. Yeongnam refers to the region that coincides with the former Gyeongsang provinces, including modern-day North and South Gyeongsang as well as Busan, Daegu and Ulsan. Honam refers to the former Jeolla provinces and now comprises the South and North Jeolla provinces and Gwangju. The conservative Saenuri Party has long enjoyed the passionate support of the Yeongnam region.

But this year, a series of incidents have prompted Yeongnam voters to withdraw their support for the Park Geun-hye administration and her party.

In June, Park’s decade-long promise to build a new international airport in the southeastern region of the country was reduced to a more cost-effective plan to expand the existing airport in Busan. After she abandoned the plan for a new Yeongnam airport, residents expressed disappointment.

In July, the government announced a decision to place a controversial antimissile system operated by the U.S. military in Seongju, North Gyeongsang. Residents fiercely protested the plan for its perceived security and health risks. Seongju residents are concerned about becoming a target of North Korea and about possible health hazards posed by the Terminal High Altitude Area Defense (Thaad) system’s electromagnetic waves, though Seoul and Washington claim there is no risk.

Also, since August, the local economy of the Yeongnam region was hit by a cholera outbreak. “We used to sell up to 5 kilograms (11 pounds) of gizzard shad every day during this season,” said Han Jae-bok, a 41-year-old fish seller in Busan’s Jagalchi Market. “But we don’t even sell 1 kilogram these days. We eat the unsold fish in the evening.”

He added, “Because of the cholera outbreak, we are selling nothing, but the government has no plan to cope with the situation. All the politicians are the same. I’m not going to vote next year [in the presidential election].”

The region was also severely hit by Hanjin Shipping’s court receivership. Small- and medium-sized companies, laborers and residents are having a tough time as the shipbuilding industry faces restructuring. The government’s decision to restructure the troubled shipbuilding and maritime industries will further worsen the situation in the Yeongnam region next year.

“It was an unfortunate series of coincidences,” he said. “The earthquakes, heavy downpours in Ulneung Island and the Thaad deployment, as well as the cholera outbreak in South Gyeongsang, are troubling locals. The local government should stay in contact with the central government and the party at all times in order to ease the residents’ concerns.”

Even in Daegu, where the most enthusiastic support of the Saenuri Party lies, residents are backing away from the party.

“Next year’s presidential election? I won’t vote,” said Jeong Ik-jin, a 68-year-old taxi driver in Daegu. “They all become the same when they become the president. Don’t even try to talk about politics, not to mention the president.”

Jeon Yeong-seon, a 29-year-old part-timer worker at a cafe in Seomun Market, said the people of Daegu are no longer loyal to the ruling party. “In the past, everyone just voted for the party, but Daegu people have changed now,” she said. “Even though the Saenuri Party produced the president, the city is not improving.”

An official of the ruling party said a conspiracy theory is spreading in Daegu. “A rumor spread among the taxi drivers in the city that the government made a false announcement about the earthquakes’ magnitudes, which were actually even stronger, because it didn’t want to stop the operation of local nuclear plants,” he said. “The changing sentiment may not be accurately reflected in the polls, but what we feel in real life is tremendous.”

But the polls do reflect a change among Yeongnam voters. After the government scrapped the airport plan, Park’s negative rating in Daegu and North Gyeongsang went up from 37 percent to 52 percent in the fourth week of June, according to the Gallup Korea survey.

After the government announced the Thaad deployment plan in Seongju, North Gyeongsang, Park received a negative rating of 52 percent in the third week of July in the Gallup Korea poll. And after Hanjin Shipping’s court receivership was announced in the last week of August, 51 percent of the region gave Park a negative evaluation.

Sentiments in Busan and South Gyeongsang are even worse. In the April 13 general election, the Saenuri Party lost five out of 18 of its seats in Busan to the rival Minjoo Party of Korea. Since the general election, the negative evaluations of Park’s performance in Busan, Ulsan and South Gyeongang remain around 50 percent. In the second week of September, when the earthquakes hit Gyeongju, 55 percent of the region evaluated Park’s performance negatively.

“In the last general election, voters cast ballots parting from their usual party support,” said Jang Deok-hyun of Gallup Korea. “If unfavorable issues continue, it could be a reason not to choose [the ruling party].”

Rep. Kim Jung-hoon of the Saenuri Party, who represents Nam A District in Busan, also showed concern. “We have time until the election,” he said. “But it is true that the sentiments have clearly changed toward the party and the people are worried about Hanjin Shipping, the earthquakes and nuclear plants’ safety.”

Lawmakers in Busan are also planning to sponsor a bill to prevent the additional construction of nuclear plants in areas near highly populated districts. They seek to forbid construction of a nuclear plant within 30 kilometers (18.6 miles) of any area that has a population of more than 3 million people.